Hello, MD readers! I can’t begin to tell you all what an honor it is to have been chosen in the 2009 MD Readers Poll in the Up & Coming category. I was in disbelief when my good friend Dave McAfee called to tell me the news. He said, “I guess more people take notice than we realize.” Dave won in the Readers Poll in the country category. I would like to thank all of the fans–the Trainiacs–for their support.

I come from the very small town of Gaston, Indiana, where most of the live music we heard growing up came from the American Legion on Saturday night or the Methodist church on Sunday morning.  My very first and biggest influence was my father, who’s been weekend drumming for over forty years. I consider myself a simple, passionate, groove-driven drummer.

I spent my teen years in the garage, shreddin’ wood with an all-original metal band.  At eighteen I started studying with Dane Clark (Mellencamp), who taught me to lay it down hard, heavy, and solid. That was around the time that I went to Indianapolis for my first live blues concert. The show was headlined by Buddy Guy, and it changed my life forever. Buddy opened my ears to dynamics, soul, and groove. From there I went on to play in local and regional blues bands.

In 2000 I hooked up with fellow Hoosiers Tim Beeler, and Brian and Brent Flynn. They were in the middle of a recording project with long-time friend and producer Richard Young of the Kentucky Headhunters, and I was blown away by the heavy, raw, deep-rooted grooves they were laying down. That opened the door to a new world of inspiration and creativity for me–writing and recording our music in the hills of Kentucky. I’ll never forget the day I was face-to-face with one of my drumming heroes, Fred Young. We were working up some tunes in the famous practice house with Richard when he popped in to check it out. Talk about intimidating! But that was quickly put to rest once we talked. Fred has a very deep understanding of groove. He’s the kind of guy you want to hang with in hopes of picking up some of the “coolness” that he so radiates.

After a couple of years we finished the record, which landed in the hands of Toby Keith, who signed us to his label, Show Dog Nashville. We were very blessed to have had two charting singles and videos from our self-titled debut album, which was released in the fall of ’07. We spent the next two years touring with Toby, and that’s where I met and became good friends with Dave McAfee. Dave is an amazing drummer and a great guy. I learned a lot observing from the side of the stage every night. He also connected me with the good people at Vic Firth and Aquarian, who keep me in play every night with the most amazing sticks and heads you’ll find.

Please check out our music. Even if you’re not a country music fan, give it a chance. We’re currently touring and working on the next album. If you get the opportunity, come on out and catch the Train. We’d love to meet you sometime. You can find us at www.flynnvilletrain.com. 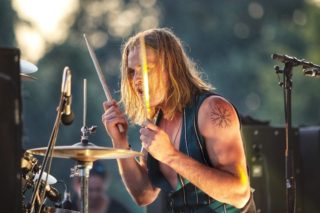 Rufus Taylor of the Darkness

Steve Moore Checks Back In With MD