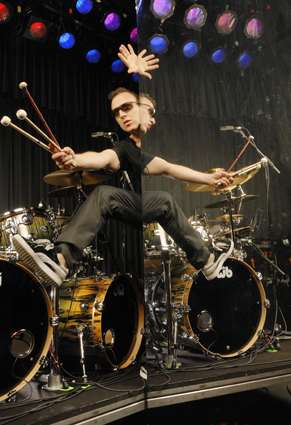 Talking with Jane’s Addiction drummer Stephen Perkins, you get that honest-to-goodness vibe that the Los Angeles–based rock musician’s life is way more than merely hitting the skins for the duration of a show or recording session.

See, Perkins really lives, breathes, and eats drums, drumming, and music, as he’s done since he first hit the stage at West Hollywood’s Troubadour at the age of fourteen. And his affable, excited, positive persona shows that he truly enjoys surrounding himself with all things percussive, whether he’s playing with Jane’s or with an entirely different musical project. Perkins’ response to one of our questions about the essence of performing in his recently restarted group sums it up nicely: “It’s the juice, the guts, the aggravation…. It’s gotta be there!”

So, do you still have that aggravation?

Hell, yeah! To me, drumming is really grabbing the emotion of that moment. I like to play in a klezmer band. And at that moment, I’m going to reach into my Jewish soul and feel it. And if I’m doing a reggae thing, I’m going to try to take everything into consideration as a drummer in how to really live up to the potential.

Growing up, it was Keith Moon or John Bonham. Bonham was the steady guy you could count on, though the clock was so interesting. Keith Moon, he’s really orchestrated, like a timpani player or a cymbal player in an orchestra. He’s making you know that this is an important part, even though it might not be exactly at the end of the four bars. I love that drama, that theater, and I love the emotion. And the sexiness of Bonham or the Meters’ drummer, Zigaboo [Modeliste]. There’s that backbeat, and he’s working the hats, and it’s like, Oh, this makes people want to move.

What is drumming in Jane’s Addiction like for you?

It’s like driving a fast car. We’re together. It’s exciting. And you know you’re safe if you turn quickly. You’ve got the tools. Everybody here wants you to sound good, and it’s a really good push, a tidal wave of good energy. We deliver the spirit and the sound.

It’s really not about your recording in 1991 from Ritual [De Lo Habitual], which is exciting, but I don’t want to talk about that as an accomplishment. It’s about what I did tonight; how was I tonight? When people went home, were they like, “Yeah, they were off the hook and the drummer was going off”? That, to me, is exciting. Sometimes it’s hard for me to watch bands if the drummer’s not great because I want to get up there and make it better for the band. But when you see a great band with a great drummer, you just give in because it feels so good. I love that feeling. I love being a part of a machine that delivers that. It’s good to have a feeling that people want to come and see us.

How have the bands you’ve played with in the interim between Jane’s Addiction activity informed what you’re doing with Jane’s now?

With Banyan, I get to overplay. I get to do my Billy Cobham. It’s taken my level of musicianship up so much, because I’m not just backing up a vocal part, I’m not just backing up a bass line. I’m leading the band. I’m doing a Gene Krupa. I’m showing what direction to go at what time. That’s definitely made me more aware of arrangement, more aware of dynamics. How are you going to keep people interested in an hour-and-a-half show without a singer? You have to be dynamic, and you have to be aware of all these little speed changes and tempo changes. All those things have made me a better player behind the kit. 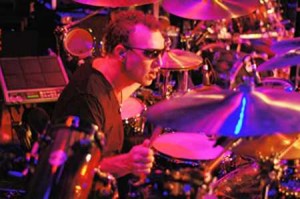 And you were doing the Panic Channel for a while too.

The Panic Channel was really cool, because it was more of a backbeat, Zeppelin thing. I had a 26″ kick drum, because I didn’t need to be fast. You’d just go “whomp, whomp,” and let the low end carry. But all that stuff really does translate to who I am now as a drummer. I think now, as a player, the endurance, the strength, the choices I make, the confidence I have–now I know exactly how it feels.

You’re also involved in some non-band-related drumming gigs and workshops. Tell us about those.

I’ve been doing a lot of drum circles with the handicapped and the elderly, getting my hands on hand drums. And I’m getting with younger people and teaching. It’s a great feeling because just like the music, once you do it, it’s gone. You tell them, and hopefully they do something with it. But I don’t want [to keep] all the information to myself. I don’t have the technique, but I have the approach.

There’s a camp up in Malibu where I do drum circles with handicapped kids and adults. I invented the Go-Jo shaker bag–me and a buddy, Joey Klaparda. It’s a strap with a bag of marbles. It’s a mutable shaker. You can stop it. You can wear it on the back of your hand for bongos. When I met the handicapped kids and adults and the elderly, I found out that they can’t actually join the drum circle, but if you put the bag on them, they’re in the drum circle. All of a sudden I found a home for the Go-Jo bags, and that opened up new doors.

Then I went to different things and different therapy sessions and conventions and learned a lot about that. One of my greatest moments was when there was a blind girl and she did not want to get in the drum circle. I started going on the bell, “ding ding ding,” and for some reason that frequency resonated [with her]. I noticed that she got up and started moving. I was getting into it and she was digging it. And her parents said that they had never seen her completely forget about everything and just enjoy the moment. I was like, Wow, this is very powerful and this is beautiful. I got comfortable with that, and I got comfortable in talking with other people. I got comfortable talking in front of other people, and I started to feel that flow of education.

You’ve also emceed the Guitar Center Drum-Off Grand Finals. How did you land the gig, and what’s it like hanging with all these drummers each year?

Whatever personality I’ve put out there, the guys at Guitar Center noticed and were like, You’d be a great emcee. It turned out to be a good thing. I like being on stage. I like talking to other drummers. I like being surrounded by Nicko [McBrain] and Carmine [Appice] and all these guys. I’m cool with that! There’s a community there where I’m happy with my position as this drummer who does his own thing. I’m not concerned about being Dave Weckl or Vinnie Colaiuta, and I’m sure Weckl and Vinnie aren’t concerned about being Weckl or Vinnie either! [laughs] Everybody’s doing their own thing. And I’m comfortable being surrounded by other drummers, rubbing shoulders with them and reminding them about how great they are. There’s this great community. We all want each other to do good, and we all want to share with each other. The guys at GC are good people.

How have you gotten involved in so many drumming-related events?

I always say yes, even if it’s a drum clinic or something. Just say yes and get there. And once you get there, you know you better practice your ass off. You have to be prepared. It always makes me play better because if I say no, it’s just one more thing that I didn’t achieve. When I show up, I give it my best. I also give 150 percent as far as who I am. I never close down and I never say no, even if it’s an autograph, a handshake, or a picture. I really appreciate and am humbled by how great I’m treated. It’s very fun, and I try to take those experiences to the very end.