Gravy
Modern Drummer, eh?! Sweet! Well, as I write this, I’m sitting on a plane from Toronto home to Edmonton. Shout Out Out Out Out has just finished the second leg of our release tour for Reintegration Time in Canada and the U.S. Time to reintegrate to regular life again!

I’ve been playing drums for about eighteen years now, but never in a band quite like this, so here’s a little insight into playing with Shout Out Out Out Out. There are really three drummers in the band–two live drummers, and a sampler/sequencer that we put loops into. It’s really the base of all of the songs we play. Once these beats are down, Clint (a.k.a. “The Kid”) and I put our drum parts on top of that. It’s a very different process from that of any band I’ve been a part of before, but it’s also really fun to be able to lay back, lock in with the beats, and rock out some dance tunes! In the studio it’s also different, in that the drums are recorded much later in the process. For this album we did most of the writing in the studio, so this worked out really nicely, and The Kid and I knew we weren’t stepping on anyone’s toes with our parts.

I honestly have no idea what people must think when they walk into a club and see us playing. It must be pretty nutty to see two full kits, three bass amps, and more analog keyboards than you can shake a stick at. I think visual appeal is fairly important to us, so The Kid and I always use Ludwig Vistalites on tour. I think they look stunning, and they sound great as well. It’s also cool that we’re repping both eras of Vistalites, as mine are old school, while The Kid’s are reissue from a few years back.

Playing shows with Clint is pretty much my favorite part of the day. He’s always super energetic and really goes bananas when we play, whereas I think I have a tendency to lay back a bit. It’s always fun playing live with him and the guys! I highly recommend y’all come check us out! Also make sure you check out our new album, as well as the video for the first single from Reintegration Time, “Coming Home.” It features our pal Cadence Weapon, as well us all being lit of fire!

Clint
Me in Modern Drummer? The kid from a small town that had potholes deep enough to use as underground parking? Me in Shout Out Out Out Out? The punk rock spazz that played a $50 drumkit for way too long? Man, am I glad my parents didn’t force me to become a welder or an engineer before I was allowed to pursue my passion and live this dream!

I started playing drums ten years ago when a couple of friends and I started a punk band in my garage. Since then I’ve played with a lot of great people in a lot of bands and gained a ton of experience. In 2004 I lucked out and got the shot to be a member of Shout Out Out Out Out with a stage show I can only describe as a an eight-can six-pack–shaken, not stirred.

My partner “in time” is the infamous Gravy. Grounded, steady, and always smooth. I think we work well together, kind of like a comedy team. He’s the straight guy and I’m the guy who likes to play like one of those cymbal-clapping monkeys that’s been wound too tight. Sometimes I think he’d like to beat me with his sticks, but fortunately he’s a professional. We had a riot working on our new album this past summer.

Playing to sequenced beats and a second drummer was difficult at first (there were more flams than a junior high marching band), but now I think we have it down, and we supply a much-needed backbone and rock element to the out-of-control mountain of pulsing analog synths. I like to think the contrast is like no other, and it’s really coming together live and on the new album.

As far as influences go, I love the late, great crazy-man Keith Moon and have admired his stage presence ever since I was a kid. I thought, Man, that guy steals the show. I’ve always tried to match or top that presence live. As for other influences, it’s funny but no welders or engineers come to mind right now.

Supla Suplicy from Brothers of Brazil 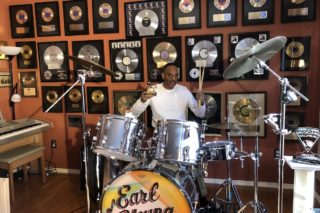 On The Beat with Earl Young of the Trammps and TSOP: The Legendary Soul/R&B Drummer Checks In