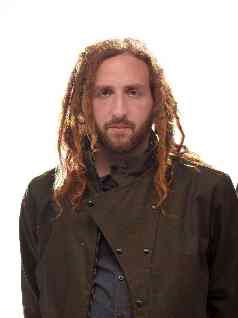 Hello, everybody, my name is Stephen Nicholson. I grew up in the city of Cleveland Heights, a suburb east of Cleveland, Ohio. I guess you can say that I became interested in drumming around the age of nine. It was a human’s ability to create rich and complex rhythmic textures–with the mind and the four limbs of the body–that intrigued me from the get-go.

To start off, my parents bought me a practice pad and drum lessons to see if drumming was something I would actually want to pursue. When they realized that I was swept away by the idea of playing a drumset, they bought me a snare drum (not exactly what I had in mind, but I guess they needed more proof). It was only after three years of urging and wreaking havoc on their Tupperware (setting it up around my snare drum to imitate a full set) that they purchased the real deal. It was the happiest day of my life (well, at least to a twelve-year-old).

Within the first year of high school I realized that developing my skills was a definite must. I was blown away and intimidated by the wealth of talent that lingered in the halls and classrooms of the Instrumental Music Department at Cleveland Heights High School. Luckily, I met Kurt Tietjen (my ex-brother-in-law) in that first year. Earlier, he had been involved with the Canton Blue Coats of Drum Corp International. I was immediately transfixed by the abilities he acquired from the long hours of practice that one must endure to perform at that level. I considered DCI to be the apex of potential for any young person interested in playing percussion instruments.

Following our chance meeting, Kurt apprehended my desire to improve my snare drum technique. So he pummeled me with a barrage of intense instruction and countless hours of practice, which catapulted my skills to new heights. (Anyone wanting to excel on the drumset should immerse themselves in snare drum studies to develop speed, strength, and technique. Trust me; it’s to your advantage.) Due to the drastic improvement in my playing, I was upgraded to snare drum in the school marching band by my sophomore year. In the two years that followed, I was appointed head percussionist (which was a painful experience, being in charge of a bunch of knucklehead teenagers), earned a position in the orchestra, and played for the school jazz band. I was exposed to a lot of really good drummers during that time, such as Dennis Chambers, Billy Cobham, Tony Williams, Dave Weckl, and Neil Peart. It was definitely a very stimulating period in my life that had a huge impact on shaping me as a performer heretofore.

Throughout my twenties I played in a number of bands, covering an assortment of musical genres like rock, hip-hop, freeform, metal, avant-garde, instrumental, and so forth and so on, but the sine qua non of that decade was when I discovered Meshuggah’s drummer Tomas Haake. His knack for polymetrics defied anything I had ever heard before. He seemed to reach beyond the instrument, forcing the evolution of drumming itself. A steady diet of Tomas was a powerful catalyst in expanding my horizons and altering my approach to drumming altogether. It was extremely liberating, dwelling in the moment, unchaining the soul, and allowing music to swirl around turbulently through my mind, body, and drumset. During that time I evolved on many levels, inculcating in myself a deeper and wider sense of direction, purpose, and capacity for creating music.

Today, I play in the band This Is A Shakedown! We’re a heavy-hitting, high-energy rock outfit that incorporates dance/electronica influences into our music. We’re signed to a label called Reversed Image Unlimited, which is based out of Cleveland, Ohio. Michael Seifert is our producer and also the man that signed us to the label. Tracking drums with Michael was definitely a unique experience. He decided to set up four completely different drumkits in Studio B of his recording studio, Ante Up Audio, miking all of them at once, so we could bounce around from one kit to another without the hassle of breaking down and setting up every time we wanted to get two different tones for each song. I think there were about thirty-eight tracks dedicated to recording drums for the album (yee-haw!). We proceeded to do some pretty wacky things, like layering multiple kits on songs, tracking the drum and cymbal parts separately to isolate the sounds and then manipulate them into drum-loops using whatever plug-ins were at our disposal, recording cymbal parts in half-time in order to speed them up over the course of the track, and recording drums in other rooms to capture ambient noise. So, I would say the drums have a lot of personality on this record! The CD is titled Love Kills. Y’all should check it out. Peace!

For more, go to www.myspace.com/thisisashakedown.