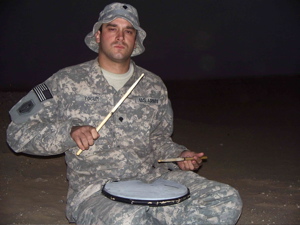 Hello from Iraq! I’ve taken time from my busy mission schedule to stop in and drum up some support. Aside from being in the military, I’ve been drumming for eleven years and have enjoyed every second of it. I was one of those kids that always wanted to play but didn’t have the time or money to get a kit. So instead I used to beat on everything I could get my hands on–mostly pots, pans, and junk. In high school I loved to go to shows, where I watched all my friends try their talents out. This influenced me to join the ranks and begin my career. Now, eleven years later, I’m playing my first overseas gig. Where else but right smack dead in the middle of a war zone!

Between April 28 and May 2, I will be attempting to break the Guinness World Record for the longest drumming marathon. I will have to play for over 103 hours straight, with only a five-minute break for every hour played, and I must accompany recognizable songs without repeating any within four hours. I’ve spent many hours at Green Zone bases getting ready. As you might imagine, getting a kit here has been a big problem. I have managed to put several rusty, bent, busted kits together in order to prepare my chops. And I’ve hand selected more than 250 songs from various genres in order to keep a crowd of soldiers from around the world entertained. Live streaming video will be broadcast on DrumMarathon.com, and I will be live blogging here for Modern Drummer. Check in and find out what it feels like to test your physical and mental stamina by playing drums for five days in a row!

Now I’m off to practice!