Hi there, Roger Taylor here (no, not the one from Queen, the other one!) and I’ve just come off the Duran Duran Red Carpet Massacre world tour. We’ve been on and off the road for around fourteen months, starting off in NYC with a ten-night stint on Broadway but eventually taking in Australia, New Zealand, the Pacific Rim, Europe, South America, Central America, North America (twice), and Canada.

There’s always a bittersweet feeling when you come off the road after such a long tour. On the one hand, I miss the camaraderie that’s built up between the members of the band and the crew, the familiar faces of the fans who follow us from city to city, and the feeling of perpetual motion. On the other hand it can be a grueling experience. I sometimes compare playing a two-hour show with going fifteen rounds with Mike Tyson, but you never get the chance to knock him out!

A scientist in the U.K. recently conducted an experiment to see how much energy a drummer burns up during a show, and he found that it’s the same amount as a premiership football player exerts over a full ninety-minute match. Now that’s quite something when you consider that these guys are considered super athletes and usually retire in their early thirties. Immediate pay rise for all drummers now, I say! But seriously, when you look at Charlie Watts, who looks as though he will still be rocking stadiums into his seventies, we can all look forward to a rather longer career than your average soccer player. 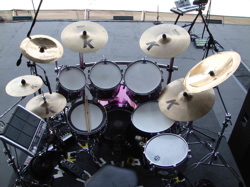 My two Tama Starclassic Bubinga kits (piano black and purple sparkle) have served me very well and are definitely the best-sounding kits I’ve ever owned. They have a beautiful deep resonance that I’ve never had in a kit before. My endorsement with Tama goes back to 1983, so I’ve owned a few kits over the years. I’ve also combined more electronics into my setup for this tour. I’ve been using my Roland SPD sampling pad more and more, as well as sensors triggering sampled sounds from the studio.

The Red Carpet Massacre album was overseen by Timbaland and Nate Hills and has loads of electronic drum sounds, programmed beats, and loops in the production, and it’s been quiet a challenge reproducing the album live. But with the help of my flame-haired drum tech, Baron Beetmoll Troy, and our super-slick soundman Snake Newton, I think we were successful.

I bumped into Brian Frasier Moore in Mexico City and he invited me to see him play with Madonna. He was amazing’as were the whole band. We own identical drumkits, and we had a great meeting of minds that sometimes only fellow drummers can have. I can only compare the experience of being at the gig to hearing Abe Laboriel play an amazing set in a small club in L.A. last year.

We’ve recently completed filming a documentary about the making of the Rio album for the Classic Albums series, which I’m very proud to be part of. Somebody asked me the other day who I was listening to before and during the making of the album. Well, there were so many great drummers to listen to and learn from then. I was a big fan of David Bowie, and he always seemed to have the greatest drummers, from Dennis Davis (the best) to Andy Newmark, Omar Hakim, and Tony Thompson (of Chic fame). So I guess I have a lot to thank Bowie for; every time I sit down at my kit, I still feel the inspiration these guys gave to me. And all the songs from the Rio album are still so great to play live twenty-five years later, I guess I must have learned something!

We’re starting new material soon, and I think we will be edging more towards a live, more direct sound for this album. So time to crack open the flight cases and start the long process of making the thirteenth Duran Duran studio album. I’m not superstitious, but wish me luck!