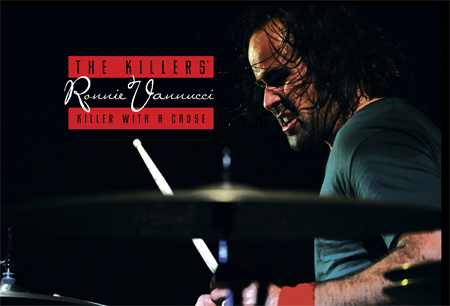 Seeing as he’s from Las Vegas, the home of twenty-four-hour gambling, retina-freezing neon, and spontaneous wedding ceremonies, The Killers’ Ronnie Vannucci has a penchant for doing things–to quote a famous Vegas crooner–his way. A natural drummer with a massive beat and a creative, chameleon-like tendency to create a new flow as the song dictates, Vannucci pulls out all the quirky stops for The Killers’ third release, Day And Age.

With sales of twelve million and climbing for their earlier albums, Hot Fuss and Sam’s Town, The Killers employed producer Stuart Price (Madonna, Missy Elliott, Gwen Stefani, Seal) to twist their already unpredictable pop style for Day And Age. Where previous Killers albums offered equal parts gritty urban beats, heraldic melodies, and chest-thumping Bruce Springsteen–style theatrics, Day And Age streamlines the band’s approach into something more groove-heavy and dance-oriented. But far from a click-track slave, Vannucci saw The Killers’ change in direction as a chance to experiment, and to expand his skill set as well as his cymbal set.

Vannucci plays 18″ and 22″ hi-hats on much of Day And Age. Even so, if he wasn’t happy with a particular hi-hat sound, he’d sing “chick chick chick” into a mic and add it to the mix. If he wanted a different drumset sound, he used a small “side kit” for a textural change of pace. And he was only getting started. For one song, Vannucci tracked nine snare drums for a massive rock ’n’ roll march. For another, he combined two drumset tracks into one, running snares in the middle of the mix, toms hard left and right, and the bass drum rumbling like a subsonic depth charge. Vannucci even sent all of his beautiful acoustic drum sounds through ancient Simmons SDS pads and then tweaked the results beyond recognition for the first single, “Human.”

Vannucci’s been a drummer since he was seven, playing in various bands around Las Vegas until, in his twenties, he landed a job working as a wedding photographer at the Chapel Of The Little Flowers. Shooting all those starry-eyed honeymooners drove him mad, though, and after seeing a Tom Waits gig in 2000, the drummer enrolled at the University Of Las Vegas as a double music major. Simultaneously, he and the rest of The Killers (Brandon Flowers, David Keuning, and Mark Stoermer) honed their songs and created a fresh pop sound that would eventually result in their topping critics’ polls throughout the US and, especially, in the UK and Europe. Sales in the millions soon followed.

Soft-spoken yet given to statements that seem to surprise him as they exit his mouth, Ronnie Vannucci is an old-school drummer in an unpredictable new world. Digital recording platforms and dance-oriented click tracks don’t phase him in the least. For Vannucci, creativity rules. Like all great rock ’n’ roll rebels, he is a killer with a cause.

MD: Overall, how does Day And Age differ from the first two albums?

Ronnie: We homed in on following where the song needed to go–and not force it to go somewhere. There’s a lot of freedom in that. We’ve taken more chances on some songs on the new album than we have in the past. For instance, on “I Can’t Say,” we brought in a sax player and let him go free. We didn’t have any hang-ups, and we didn’t want to write for trend’s sake. As a joke I stuck some steel drums on “I Can’t Say,” and we ended up keeping them. We followed what felt good and that often meant pulling back more often than putting the kitchen sink in.

MD: Your drumming generally strikes me as being unburdened by any thoughts of a click. Do you record to a click?

Ronnie: Most of the time we do. When I was in school I spent a lot of time with a metronome. I learned how to use it but not let it hinder my musical sensitivities. I practiced a lot of snare drum exercises with a click, and the challenge was to make them flow along with it. It also depends on the song you’re playing. Some songs need to swing more than others, and some need to lay back. Sometimes you need to be right on top of it. I use the click as an “approximator.”

MD: There’s a feeling of breath and air in your beats. The Live At Abbey Road sessions show that sense of air and space, almost like Levon Helm in a way.

Ronnie: I think it comes down to the player and to his musical sensibility. Drummers like Levon, Mitch Mitchell–those are my guys. They had something in common. They really breathed and moved with the music. People think drummers just hit things, that we’re a bunch of knuckle-dragging caveman with sticks. But if you’re sensitive to the music, you can make a real impact. Just because you’re a drummer doesn’t mean you have to lose that.

MD: Are we hearing your new Craviotto set on Day And Age?

Ronnie: Yes, it’s all Craviotto. I was hung up on vintage gear for a long time, and I had a ton of stuff in my garage. I used it all on Sam’s Town. At the end of the day I settled on Ludwig drums and various snare drums–Supra-Phonics, a 6 1/2×14 Leedy Black Elite, Radio Kings, and a Craviotto I had. But Day And Age is all Craviotto.

MD: Tell me about your fixation with huge hi-hats. You’re playing 18″ hats on the new album!

Ronnie: Yeah, depending on the brand. For me 14″ hats can sound too mousy. On Sam’s Town I used these great 1950s Zildjian 15″ hi-hats. They sounded terrific by themselves, but by the time you miked them and put them on the track, the only way you heard them was if you turned up the highs. That’s another reason I didn’t want to record with a hi-hat mic. I wanted to be able to play balanced enough so I didn’t have to use a lot of moving faders and EQ.

On Sam’s Town I used my mouth to overdub the “chick, chick, chick, chick, swoosh” over the hi-hats on some songs. You can hear it on the title track and on “For Reasons Unknown.” Live, I wanted to get a different hi-hat sound, so on the first gig for Sam’s Town I had an old 18″ A Zildjian ride from the ’40s and a K Constantinople crash that I put together for a pair of hi-hats. That was the winning combination. And there was one track where I used two 22″ K Constantinople rides, one high and one low, for the hi-hats.

And Then The Planets Aligned…

MD: When did you start playing?

Ronnie: I just like drummers. I don’t go for any one style. I appreciate Neil Peart now more than ever. Keith Carlock is a monster, and Jo Jones was unreal. He taught me how to play hi-hats. And Mitch Mitchell taught me how to swing. I always think of him as a lead drummer. And I like Charlie Drayton.

MD: You’re an earthy drummer in an organic, song-driven band. Given those traits, does it ever strike you as ironic that you come from Las Vegas, of all places?

Ronnie: Yes, and it’s also ironic that we’ve been referred to as a synth band. We’re just four different people coming from four different musical areas. But it works for us. The planets aligned and it’s worked out. If we were all the same, the music would be boring and I probably wouldn’t be doing an interview with Modern Drummer.