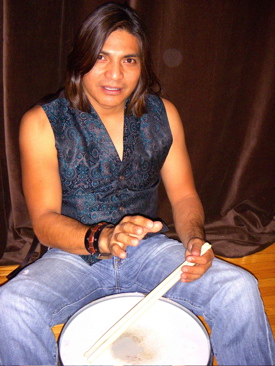 Hello, MD readers, my name is Hawk Lopez. I’m the drummer for the hard rock band Crown Of Thorns. Let me start by thanking Modern Drummer for this opportunity. I’m a lifetime MD reader, and it’s been a constant source of knowledge and information.

I’ve been with Crown Of Thorns since 1994, when I was recommended to Jean Beauvoir by Ozzy Osbourne drummer Randy Castillo and Crown Of Thorns bassist Michael Paige. I took over the gig when the great Tony Thompson left the group to re-join Power Station. Two weeks later I was off to Europe to support the band’s debut album, Crown Of Thorns, produced by Jean Beauvoir, Gene Simmons, and Paul Stanley. Shows with Bon Jovi, Van Halen, and David Bowie, as well as the band’s own headlining tour, kept me busy over the next two years.

I was also the touring drummer for Grammy Award-winning artist Solomon Burke, playing some of the most prestigious music festivals in the world for three years after taking over the job from soul-drumming master Bernard Purdie. While on tour with Solomon Burke I received a call asking me to be the drummer for country artist John Corbett, supporting his hit single “Good To Go.” Three years of tours and television appearances followed. Currently I’m performing with Native Music Rocks, a collection of talented Native American musicians, singers, and songwriters including Dereck Miller, Martha Redbone, Micki Free, and Shea Keck.

I started like a lot of us drummers, banging on pots, five-gallon buckets, and trashcans. When I was thirteen years old I bought an old drumset at a yard sale for twenty bucks. I didn’t leave my garage that whole summer. I watched and listened to every drummer I could–Steve Gadd, Ringo, Billy Cobham, John Bonham, and Tony Williams, just to name a few. Drumming had captured my soul. I never thought about doing anything else. I took lessons with Dave Beyer, Alex Acu’a, and Chuck Flores. I also marched for The Velvet Knights Drum & Bugle Corp and my high school marching band. Those experiences gave me a good foundation to work from. Of coarse, learning and studying is an ongoing process.

I feel that having an appreciation and understanding of different genres and musical history gives you more to offer the situation you’re working in. For me, it’s meant being able to play soul music with Solomon Burke at the Montreux Jazz Festival, fly home, do a country show with John Corbett at The Grand Ole Opry, and then record a hard rock record with Crown Of Thorns. It’s all fun to me, and I’m very excited about the new Crown Of Thorns album, Faith. I recorded the drums with engineer/producer legend Bob Clearmountain (The Rolling Stones, Toto, Bruce Springsteen, NIN). He’s known for getting killer drum sounds, and I think we achieved that on this album. Jean Beauvoir (producer/writer/vocalist) gave me the tracks semi-complete. Everything was played to a click. My job was to lock it in, make it feel good, and play for the song. It was a blast working with Bob–and after fourteen hours we were done!

My setup is fairly simple: a 16×22 kick, a 12″ rack, a 16″ floor tom, 15″ Mastersound hi-hats, a 22″ A custom ride, and 16″ and 18″ custom K crashes. As for snare drums, I brought in a wide assortment of sizes of brass and wood models. Bob and I decided on two–a 6×13 maple and a Craviotto one-piece maple. In terms of tuning, for the kick I use medium tension both sides, a small pillow, and a 6″ hole on front. For toms I just get the wrinkles out, then tune up only slightly. My goal is to not use tape. Of course that has a lot to do with your drums’ edges and heads. For snare tuning it’s best to be flexible. I had my snare nice and tight, and it felt good to play. Then Bob asked if I minded him tuning my snare. He went for a looser, more open tuning that matched the music better. It really opened my mind.

Besides Crown Of Thorns’ new one, you can hear me on Tara Novick’s upcoming album, Spin, as well as Solomon Burke’s DVD Live At The North Sea Jazz Festival.