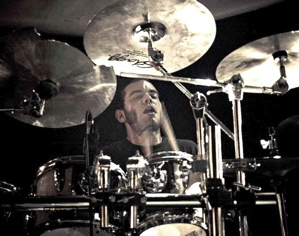 Playing drums in a legendary band is not only a job, it’s an adventure. Being part of this band means a lot to me. I’m currently traveling the US with them on their fourth headlining tour, in support of the Axis Of Eden album. On this tour we play along to a movie that’s being projected onstage during our set (directed by David Hall, a great artist). This has been a real challenge for me. I flew to Nashville on October 23, and after a week of rehearsal I was onstage with one of the most inspiring bands of the metal scene.

Playing along to a movie takes a lot of concentration. We play the whole Axis Of Eden album in the very precise order of the album. We play the songs between scenes of the movie. I could have used a click, but I felt that it would take away a part of the feeling, so I’ve got to keep the groove as precise as possible. Not only have I had to learn drum parts, I’ve had to learn parts originally written and recorded by drummers such as Brann Dailor (formerly of Today Is The Day, now with Mastodon), who I have a lot of respect for. Once we’re done with this tour, we’ll hit the studio and start working on the next Today Is The Day album.

The list of drummers I love would be too long to include here, but here are some names: Chambers, Grohl, Bruford, Jones, Cobham, Paul, Cunningham, Colaiuta. Thanks, guys!
For more on Julien Granger and Today Is The Day, go to www.supernovarecords.net or www.myspace.com/todayistheday.