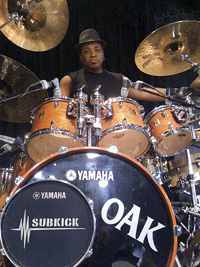 Eric Valentine has always enjoyed performing with different people, so going from Patti LaBelle to former Toto six-stringer Steve Lukather wasn’t really a challenge for him, it was just another gig. “When I was growing up,” Valentine says, “I listened to a lot of different kinds of music. I would watch videos and really listen. When I study material I try to respect it for what it is.”

These days it’s not unusual to catch Valentine one weekend playing with Joe Albright and the next with Kirk Whalum. After watching and being inspired by fellow drummer Chris Dave, Eric made the decision to adjust his course, abandoning the goal of attaining a psychology degree for a career in music. “I saw Chris play at a jazz festival,” Eric says, “and after hearing him, I was so moved that I decided I really wanted to do this.”

Since moving to Los Angeles from DC three years ago, Valentine’s career has taken off. He’s performed with Mindi Abair, Stevie Wonder, Erykah Badu, Dionne Warwick, Jonathan Butler, and Warren Hill. It was while working with Hill that Eric met keyboard great Steve Weingart. “Steve was putting the band together for Luke,” Eric recalls, “and as we were having a conversation about music, the Luke gig came up. He said, ‘I want you to be on it. There’s no audition, so come in ready.’ Everyone came prepared, so when we got together, we knocked it out.”

At a recent sold-out Luke gig at B.B. King’s in New York City, not only did Eric impress the audience with his drumming talent–including an inspired extended solo–his vocal harmonizing was spot-on. “Actually, that was a requirement for the gig,” Eric explains. “I usually tell an artist I don’t sing, because I just like to concentrate on playing. But for this gig we had to do it.”