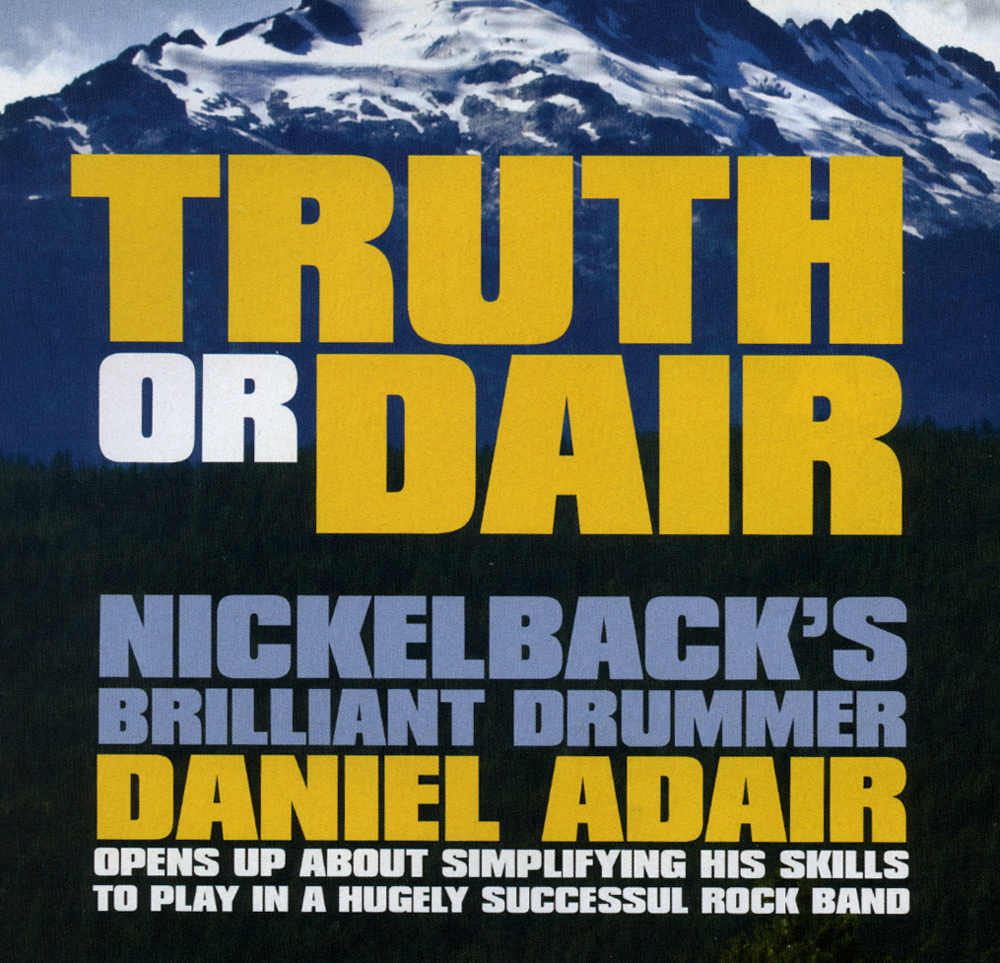 Nickelback owns rock radio. Over the past five years the band has sold more than twenty-six million records while garnering awards and top-ten singles faster then you can say “Oh Canada.” In addition, Nickelback has set records on Billboard charts, collected numerous People’s Choice and World Music Awards, and written enough hit songs to fill a hockey rink.

One quarter of the equation is drummer Daniel Adair, who joined the band in 2005 after a three-year stint with Three Doors Down. Adair wanted to be a full-time bandmember, not a hired gun, and he wanted to play with Canadian brethren. The band quickly followed with All The Right Reasons, spawning five top-twenty hits and soaring to number one on Billboard, eventually going seven times platinum. And for Adair, Nickelback seemed the perfect showcase for his immensely deep talents. 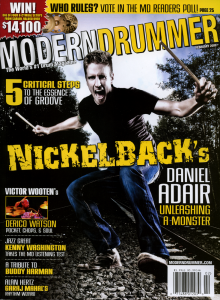 For the past three years Adair has rubbed elbows with (and thoroughly impressed) some of drumming’s finest, and he’s even had the opportunity to take lessons with drum legends. He’s also played on tracks by Lynyrd Skynyrd, Theory Of A Deadman, and Bo Bice. And he’s the drummer for Canadian guitar shredder Dave Martone, whose new record, Clean, is further proof of Adair’s over-the-top prowess.

Daniel Adair is a drummer’s drummer. His technique, precision, and finesse somehow live very comfortably with the way he can motor a meat-and-potatoes rock band in 4/4 time. His live solos have been hit thousands of times on YouTube, as he administers Virgil Donati–like riffs that mesh perfectly with the band’s massive lighting and pyrotechnics show.

Nickelback’s latest disc, Dark Horse, finds Adair playing for the song and more. From atop his throne, there simply doesn’t seem to be anything he can’t do on a drumkit.

MD: You’re becoming known as a drummer with serious technical skills. How do you lay back in Nickelback?

Daniel: There’s a pride as an artist to play all the chops I’ve worked on, and then there’s the fact that drummers and bass players are accompaniment musicians, so we have to follow the lead from the rest of the band. If I’m playing in Martone and Dave is playing 64th notes as fast as possible, then I have to keep up with him. But if I’m playing a tune in Nickelback that’s 8th-note or quarter-note driven, then I really have to follow that lead and try not to step on anyone’s toes. In NB, when we’re singing a song about heartbreak or a girl not calling you back, I really don’t want to break out the Swiss triplets across the kit.

MD: I know you get to shred nightly with NB during your solo.

Daniel: That is the thing I love and hate at the same time. I have the solo pre-written because of the lights and the pyro, and I use ideas that really get the crowd excited. When I’m constructing solos, I’m usually relaxed in the privacy of my home, so I create these parts that in a live situation tend to sound much harder than they are. It definitely allows me to keep my chops up and constantly gives me something to work towards.

MD: How do you best bring your fusion and progressive influence into a band like Nickelback?

Daniel: On All The Right Reasons I had a chance to open up the album with some Donati-ish double kick work, which kind of made the statement of, “I’m the new drummer!” There were some other moments where I snuck in a couple of not-so-typical rock fills. The new album is pretty basic, but I do get a lot of room to improvise live. The guys don’t mind it at all, and I really enjoy the fact that the song gets to be a bit of a canvas for me to put my own paint on.

MD: Nickelback is a physical gig. What’s your warm-up routine? 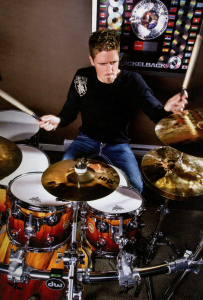 Daniel: About three weeks before a tour, I try to practice the set at home at least four or five times a week on top of two hours of developmental routines. Playing live with NB and practicing is two different animals for me. When I play the set at home like I would live, that’s the end of my practice for the day, because I’ll be soaked in sweat and my head-banging muscles will hurt. I also practice all my vocal harmonies. Chad likes the fact that I can sing high, so every album has more and more super-high parts for me to sing. In a way, I’ve created a monster with that.

When we’re on the road, I try to get forty-five minutes on the pad, and then about an hour on a drumkit backstage before the show. I do simple stuff and straight double kick to warm up the legs. I usually throw in some of the more difficult components from my solo to get cozy with them again for the day.

MD: How do you practice on the road?

Daniel: I’m fortunate enough to have a drum room every day with a drumkit that has the same specs as my stage kit. That’s a luxury I don’t take for granted. There are some drummers on the crew as well, and I know they get the urge to bust out some beats, so I let anybody use it. I also have a practice pad and sticks on me at all times, and I’ll usually get in some good pad time in the hotel on days off.

MD: What’s the coolest thing you’ve learned from other drummers while touring?

Daniel: I’ve had a chance to tour with some great drummers, and if there’s the opportunity, I’ll try to swap ideas with them. Aaron Montgomery from Trapt is a fantastic player; he showed me some great rock fills, including the inverted-doubles fill he pulls off in the re-intro of their song “Stand Up.” He’s so relaxed when he plays, even while he’s hitting hard. Chad Szeliga from Breaking Benjamin is a chops factory. Just listening to him fool around on his electronic kit backstage inspired me to practice more. Kevin Soffera [touring drummer who played with Seether and Breaking Benjamin] is one of my favorite drummers. He inspired me to really think about how to phrase differently and displace regular fills to create a new idea. 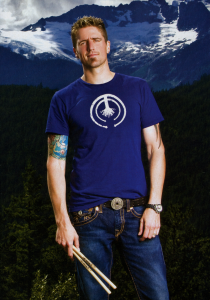 Being around drummers who are still as excited about drumming as the day they started is inspirational. It’s infectious and makes me want to practice more, and it helps bring that childlike joy back. Inspiration is the hardest thing to find when you’re on the road and the routine has set in.

MD: Let’s talk about your contributions to the new Martone disc, Clean.

Daniel: That’s my big musical outlet. Dave and I have always had this musical connection. We’ve always played too many notes on top of the beat because we’re both so full of energy. We like to create music that’s very challenging to play but interesting. He’s trying to create a sound that hasn’t been done before. I realize that’s difficult to do, but he’s coming close. He might not sell as many records as Nickelback, but he’s doing what he loves to do.

I love the way Dave and I work together; it’s a true band kind of approach. He’ll write the tune to a drum loop and email it to me, and then I’ll spend a couple of weeks playing through it, coming up with my parts. I try to pick up on all of his nuances, so you’ll hear me match accents he plays in his solos and so on. Then I’ll try to be creative and put some interesting fills and phrasing in the tune. After we record the drums, Dave then rewrites some of his guitar parts to match the drums. How often will a songwriter do that? It’s very satisfying to have that kind of input and be in a band where anything goes.

Read the rest of this interview in the February 2009 issue of Modern Drummer in print and digital.