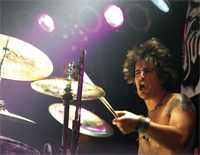 At a time when rapid-fire double kick and Pro Tooled precision are practically the boilerplate for modern metal drumming, Blacklist Union’s Sean Davidson takes a different approach: concentrating on simplified, groove-based playing while adding an aspect of old-fashioned rock showmanship to his band’s explosive performances.

“Many of my drumming influences–from John Bonham to Tommy Lee and Morgan Rose–are also amazing showmen,” says Davidson. “That’s what I go for live. I love doing spins and adding big arm swings rather than just sitting back there and keeping the beat.”

Despite enjoying the flash aspects of rock drumming, Sean describes himself as a song-oriented player who’s conscious of not stepping on the vocals. “Tony, our singer, has a very unique voice and writes great lyrics,” the drummer explains. “As far as the drum parts on our new CD, Breakin’ Bread With The Devil, I tried to just lock in a solid groove and let him tell a story over it, putting in beats that would get people dancing.”

Sean explaines that avoiding some of the common metal drumming techniques better serves his approach to the kit. “Being a solid blast beat crazy 16th-note drummer never appealed to me. I like double bass as much as the next guy, but my style came more from listening to White Zombie and Nine Inch Nails–heavy stuff with a lot of rock ’n’ roll guitars over it. It’s heavy but there’s a lot of groove to it.”

Sean plays a DW kit with small toms–a 10″ rack and 12″ and 14″ floor toms, the positioning of which he’s recently rearranged. “When I’d be doing a four-on-the-floor type of pattern,” Davidson offers, “where I’d usually have my 12″ tom, I thought, ‘Why don’t I put my 14″ there?’ because I was playing that one more anyway. Now I play 10″, 14″, then 12″ coming down, and I like the setup a lot better that way. On the song ‘Come Inside,’ what might normally be a pretty basic fill sounds just a bit different because I’ve switched the toms without having to do any awkward sticking across them.”

There’s more to this article in the January 2009 issue of Modern Drummer, on sale now in print and digital.