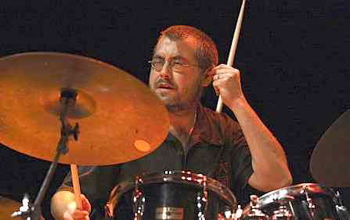 The year 2008 has proven to be quite a productive and exciting one for me. I’m playing drums in three new projects, all quite different from one another. Yoshie Fruchter’s Pitom is a Jewish avant/hard rock band with a CD just released on John Zorn’s Tzadik Records. Yoshie’s a great young guitarist and composer recently on the scene here in New York from the DC area. The band also includes Jeremy Brown rockin’ on the violin and my old friend Shanir Blumenkranz kickin’ it on electric bass.

I’m working with my bass-playing brother in the other two projects. The Mark Zubek Quintet (Avishai Cohen on trumpet, Mark Turner and Seamus Blake on saxophones) has a CD being released in late 2008 on Fresh Sound New Talent Records. Mark’s modern jazz compositions are amazing and very difficult, most of them in compound odd time signatures. He also throws in a couple of great rock songs played by this chordless jazz band. The horns are playing some cool guitar riffs and wild effects, not too much unlike The Bloomdaddies, Seamus’s old band.

The Juerg Wickihalder International Jazz Quartet, based in Europe, has a CD this year as well, on Intakt Records. My brother Mark is also the bass player in that band, which features as Achille Succi (Italy) and Juerg (Switzerland) on horns. Juerg’s music is swinging, jumping, and a little avant garde at the same time. Lots o’ fun!

I’ve also been playing quite a bit with Noah Jarrett, a great young bass player who happens to be Keith’s son. Noah is the sub bass player in Pitom when Shanir’s out of town (which has been quite a lot lately).

Finally, my wife, Oum, and I have our first little girl on the way late this year! Can’t wait to see what’s in the cards for 2009!
For more on Kevin Zubek, go to www.pitommusic.com, or email him at kzubek@hotmail.com. Photo by Dragan Tasic, www.nga.ch.