Though legendary hardcore punks The Dead Kennedys are still officially together (minus frontman Jello Biafra), they’re currently enjoying a self-imposed hiatus. Drummer D.H. Peligro, (pictured left in photo) is keeping himself occupied with his solo band, dubbed Peligro. But with the Dead Kennedys, things never go truly quietly. “We just took some time out to work on our own projects,” D.H. says. “We recently got a gold record in America after all these years, and one in the UK too. That was for the compilation album Give Me Convenience Or Give Me Death.”

The talismanic tub-thumper insists he still enjoys getting behind the kit to play those old songs. “I know the songs,” he says, “so it’s kind of like putting new energy into them. Back in the day, I had really shitty drums and made do with what I had, except for when we went on tour and we’d rent a kit. After all these years, I have top-of-the-line stuff, and it makes things easier. And I don’t play those songs the same as I used to–I switch it up. I now have a double kick pedal, plus I add cymbals and stuff. When we were getting paid on tour, you never knew when that money was going to stop. As a result, I rarely changed the heads on my drums.”

Though he fronts Peligro, whose album The Sum Of Our Surroundings recently won the Rock Album of the Year award from the American Independent Music Awards, D.H. finds it tough to give total control of the drumming over to someone else. “I’m the guitarist and frontman in my band,” he says. The drummer is a guy named Steve Wilson. It’s hard to give control of the drums over to anyone else, which is why I have to make sure I have a really good drummer. I try not to pay attention, but always in the back of my mind I’m hearing what the drummer is playing.”

There’s more to this article in the January 2009 issue of Modern Drummer, on sale now in print and digital. 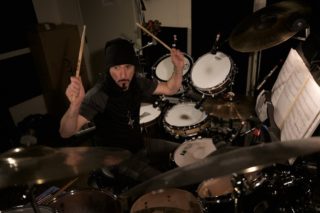 On The Beat with John Mader of Hamilton: Talks Versatility and Getting the Gig

On The Beat With Joe English of Secrets: Self-Taught Versus Taking Lessons