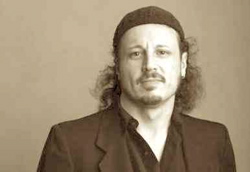 Hello, MD readers. Steve Gadd, Aaron Comess, Jerry Marotta, all Yamaha drummers and featured on the same record…. Pretty good karma to say the least. Oh, and melodically and graciously felt in the bottom end by “funk fingers” himself, Tony Levin on bass. The CD is titled Kingsway because much of it was written in New Orleans at Kingsway Studios, owned by producer and singer/songwriter Daniel Lanois. I wrote this record along with enough material for a second in approximately twenty-four hours–I think they call it “channeling.” You can read all about it at www.myspace.com/romanklun.

With the grace and energy of Steve Gadd, the power and flexibility of Jerry Marotta, and the soul and sought-after groove of Aaron Comess, each song rises to the occasion as carrying its own signature and sound–like a moment in time being captured by a photographer. Yamaha drums were there for every beat and bar, even on the three tracks I played. I began my walk in this industry as a drummer and still love to play. To quote Peter Gabriel, “A great song comes from groove and melody.”

For more on Roman Klun, go to www.myspace.com/romanklun or www.romanklun.com.