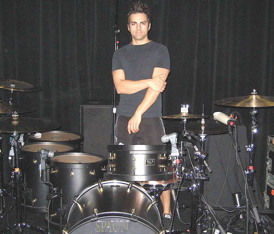 Hello, fellow MD readers, my name is Mika Fineo. For those who don’t know me, I’m the drummer for the rock band Filter (“Take A Picture,” “Hey Man Nice Shot”). Here’s a short blog about how I got to where I am.

I was born into a musical family, with a father who was the keyboardist for George McCrae. (You might remember the classic ’70s hit “Rock You Baby.”) By three years old I started taking piano lessons, which I would continue for about fifteen years. Though I was a trained pianist, at the age of nine I transitioned to a love for drumming when my neighbor let me play his old kit. From that point on I got intense about drumming and started playing in the school jazz bands. A few months later my father bought the neighbor’s kit, and at fourteen years old I started to take lessons from various drum corps teachers, working on form and meter. Sticking with that for a while, I started playing in local bands and at friends’ recording studios. My dad would constantly take me to all these great jazz venues, and I would analyze the drummers in great detail. By sixteen I was studying with renowned teacher Steve Rucker. (Steve teaches at The University of Miami and played with The Bee Gees.)

Steve started applying jazz and bop studies to my training. He was real adamant about form and creativity, thinking outside the box, and bringing out all the hidden colors of the drumset. It was while studying with Steve that I learned to expand my musical mind on the drums. As I continued with my studies, I also started playing at my church. It was there that I quickly learned that I had a long way to go to becoming a truly professional player. Thee other players were just monsters, and a lot of them were touring pros. It was an enormous church with one of the best music teams in the country, and with that my skills where heavily worked into shape, performing with an intense musical director. You know, I think I stand for the majority of the biggest pop and R&B drummers when I say that playing at church is some of the greatest training you can get. You also learn to become humble.

It was with all these teachings that I would start to create my own voice on the instrument. Moving forward a bit, at twenty-one I began to perform and write with many local groups, some of which were signed to major labels. When I hit twenty-three, I decided it was time to take my career further and move to one of the major music cities. Los Angeles fell into place for me, and I had some strong connections and a few gigs lined up there.

So I made the move to the West Coast and began to play on some minor sessions and to work and write with a Geffen Records band called Red Skeleton. As I knew that our ever-changing music industry was seeing its worst days, I felt that committing to just one thing would be way too risky. That being said, I stayed adamant about constantly promoting myself. For two years I tackled every studio, producer, songwriter, engineer, publishing company, and anything else that would help me find work. For a few seasons I even worked at the Drum Doctors, where I got to set up for all the big boys at major recording studios!

It wasn’t until the age of twenty-six that I would finally get “the call” from mega-producer Josh Abraham at Pulse Studios that the band Filter was back and searching for a drummer. The Geffen band I was signed with at the time had recorded its album at Pulse, and I hit it off with Josh Abraham during those sessions. Josh really liked my performances and wanted to offer me more work outside of the band I was in. When the Filter gig came along, Josh gave singer Richard Patrick my number, and Richard contacted me the same day. I was already familiar with all the band’s albums, so I knew it would make for a comfortable audition. After a few short runs through the songs, Filter offered me the gig on the spot. Funny thing is, three days later my old band was dropped due to Geffen’s merger. The timing could not have been better, and I was truly blessed! It is with these happenings in my life that I have learned that no matter hard it gets, there is always another door just waiting to be opened. All it takes are some chops, perseverance, and a lot of faith!

All the best to you fellow drummers!