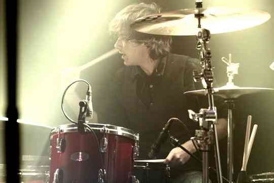 Hi, my name is Chris Vest, and I play drums in Framing Hanley. Let me start by thanking Modern Drummer for this opportunity. Ever since I was thirteen, I can remember picking up MD and reading about all of my favorite drummers. It was about that same time that I first started playing drums. At the time my neighbor was the drummer for country artist Patty Loveless. I would occasionally go over and attempt to play drums, but at the time it sounded more like drums being thrown down stairs. He eventually gave me my first snare drum, made out of some spare parts that he had lying around the house, and that was the beginning.

For the next few years, I saved every penny I had. Along with constant pressuring of my parents every birthday or Christmas, I slowly built up a kit of my own. Once I had a complete kit I began trying to learn songs from all of my favorite drummers for practice. I would spend hours after school learning nearly every Metallica, Bush, and Deftones song until I knew it from top to bottom. It wasn’t long after that I started high school in a new town, began meeting new musicians, and formed what would eventually become Framing Hanley.

Like most upstart bands, we worked our butts off for months in my parents’ garage, just jamming and trying to write our own material. Then the real fun began. It was time to go out and play shows! We went around and tried to book ourselves into nearly every club in our hometown of Nashville, Tennessee. The first shows were pretty rough–frankly, we were horrible–but I gained something that was much more important: I fell in love with playing in front of a crowd. The “crowd” usually consisted of forty or fifty of our friends and family, but it was such an adrenaline rush to just get on stage and have fun. It’s a feeling that still hasn’t gone away to this day. I can be having the worst day ever, but when I step on stage and start throwing down with four of my best friends, it all goes away.

We spent a good part of the next two years trying to get our name out and playing just about any club that would have us in Nashville before we caught our break. In November of 2006, we went down to Orlando, Florida and recorded a couple songs with Brett Hestla, the singer of Dark New Day. From those recordings came what would become our first single, “Hear Me Now.” Soon after we returned to Nashville, we were contacted by Jeff Hanson (former manager of Sevendust, Paramore) about signing with his relatively young label, Silent Majority Group. After signing with SMG, we returned in February to Orlando to record the rest of our first full-length LP. I can honestly say I learned more as a musician in those two months than I had in two years. Everyone came into their own and became more confident as musicians, which really helped us to find our own sound.

On August 7, 2007, my childhood dream came true when our debut album, The Moment, was release nationwide via SMG/ILG. Since then we’ve been out on the road having the time of our lives with bands like Trapt, Fuel, Evans Blue, and Saving Abel. We are currently about to release our version of Lil Wayne’s “Lollipop” on iTunes, which we’ll be shooting a video for in the coming weeks.

Thanks to all the Modern Drummer readers for your time, and we hope to be in a town near you soon!

For more on Chris Vest and Framing Hanley, go to www.myspace.com/framinghanley.