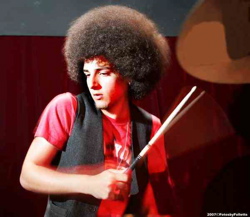 Hey, what’s up, MD readers. My name is Matty Amendola, and I’m from Brooklyn, NY. I play drums on a few projects, one of which is Weird Old America, featuring guitarist Nick Diaz, who’s originally from Texas. We recently finished recording our debut CD. I also play bass and a member of a band called The Classic Futures, featuring MTV VJ Damien Fahey on drums. Both these CDs are available at iTunes and our myspace pages listed below.

Besides those two projects, for the past five years I’ve been working as a drummer for hire on the NYC session and club scene. I did a few nationwide tours with several different acts, and I’ve been fortunate to play just about every small and large venue in the NY area at a very young age. (I’ll be twenty at the end of this year.)

I grew up learning my way around my dad’s studio and playing along to The Beatles and many other classic rock records from his massive record/CD collection. As I grew into my teens, I moved along to funk and hip-hop. I later studied jazz while broadening my perspective of music theory.

When I was twelve years old, I taught myself guitar and bass, and this really opened my eyes to learning what being a musician really was. I started writing and recording my own songs and playing everything just for fun. The next challenge was learning to sing. When I started studying music seriously, voice training was my top interest. As much as I love playing drums, I didn’t want to read charts or practice rudiments all day. I wanted to be able to write, produce, and perform my own songs.

About a year ago, in between being on tour, I started writing and recording my debut solo album. I’m happy to announce that it’s now available on iTunes and any other digital music outlet. The CD is called = Ecstasy, and I wrote, produced, and performed everything on it. I hope you have a chance to check it out and learn the same important lesson I did about being a drummer: It’s all about playing what’s right for the song! No matter what instrument you’ll see me play, I will always be a DRUMMER first!

Thanks for checking out my blog. Drop me a line to say “hey,” I’d love to hear from you!