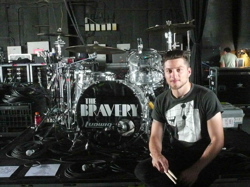 Hey, everybody. This is Anthony from The Bravery. I’m enjoying a day off here in Charlotte, North Carolina, and I wanted to let you all know what’s been going down on Projekt Revolution 2008. We’re about a week into the tour, which kicked off in Boston on July 16 at the Tweeter Center. We were super psyched when we found out Linkin Park asked us to be on the bill. We’re always happy to get an opportunity to make new fans, and Projekt Rev is a great platform to perform in front of thousands of enthusiastic, open-minded people.

A great bonus to this tour is that my close friend Jason Sutter, who now plays drums for Chris Cornell, is also out on this tour. Jason is an amazing drummer who has one of the most musical feels and pockets I’ve ever heard. We actually just found out that the Ludwig factory is here in Charlotte, so Jason, my new friend Jeff from Ashes Divide, and I are going to do a tour of the factory tomorrow on our day off.

As far as gear goes for this tour, I’ve been playing a clear Ludwig Vistalite kit with Zildjian A Custom cymbals. I find the Vistalites have a very open sound, and from the feedback I’ve gotten, they’re sounding full even in the open outdoor arenas we’ve been playing. (Outdoor venues usually diminish the body of most drums.) I’ve been using Evans G2 clear heads, which have proven to hold their shape and sound for consecutive shows, even considering the sweltering heat they’ve been encountering on these stages. I’m currently using Vic Firth 5B wood-tip sticks, which in my opinion is a very versatile stick that performs excellently in many different styles.

Well, like I said, it’s only been a week and I’ve already had an incredible time seeing ferocious bands and making new friends! The tour will be going through the country out west and then finishing in Houston, Texas on August 24. It’s a fabulous lineup of bands and includes some of the best drummers you’ll find–I promise. So check out our Web site, www.thebravery.com, for shows near you. Don’t snooze on this, or you’ll regret it.

I especially want to thank Linkin Park and their entire team for the amazing opportunity they’ve given us to be a part of Projekt Revolution ’08.