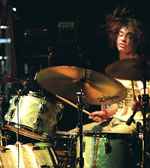 “Unlike a guitarist or singer, I don’t get the opportunity to play in the van. We get a soundcheck and that’s it, so lots of times I have to wait until I hit the stage to really start playing.” So says Julian Dorio of The Whigs. “The idea is to play the first song of the set like you’re half-way through. You can’t take the first three songs to warm up and then get a feel going. You have to gear up and get ready and then hit as hard as you can–our set is like a long sprint.”

The Whigs, of Athens, Georgia, are currently touring in support of their major-label debut Mission Control (on ATO Records). Dorio says that he doesn’t have a particular pre-gig routine, but rather focuses on preparation before the tour. “We practice a lot at home,” he says. “We try to practice like we’re playing a show, except when we’re writing, which is a little more laid back. But otherwise, what’s the point unless you execute? I want to get everything figured out before we hit the road. I try to anticipate everything.”

While Mission Control clocks in at under forty minutes, the band covers a range of musical territory, from the punk-aggressive “Like A Vibration” to the crossover appeal of “Right Hand On My Heart” and the lazier feel of the 6/8 “Sleep Sunshine.” According to Dorio, “We wanted to make a record indicative of our live show.”