With the coming of the new year, I had a bunch of habits and routines I wanted to refine or correct, drumming being the most important. But I recently got an XBOX 360, and drumming kinda took the back seat to Call Of Duty. I managed to become stressed and obsessed while watching fellow squad members get wasted only inches away from me. Seeing their blood splatter as they collapse lifeless ignited the “I gotta save that guy’s life” mechanism inside me. Man, it was intense! And the sniper missions—it’s all about the Ghillie suit! Finally I captured the flag, so to speak, and moved on to Bioshock, which managed to scare the hell out of me with its amazingly creepy story and characters that seemed like a real-time nightmare.

Throughout the game, when you come across something of interest, the phrase “What is it?” will show up near the object. Without fail, every time that happened all I could think about was Faith No More’s “Epic” and singer Mike Patton saying, “What is it?” That evened the scale between humor and horror for me. Funny enough, “Epic” appears on the newest game I just, Rock Band. It’s so fun to play. Not only that, it’s a great source of practice material that helps me play in time.

The game is set up in the same way Guitar Hero is, where you have to line up the hits with the designated colors that scroll down the game screen–very similar to a metronome or click track. Playing to a click is not my strongest point, so the game is perfect practice for me. And it sends me back to when I was just learning how to play drums, listening to music on my headphones and mimicking the beats of whoever I was listening to.

Who would have thought I’d end up practicing while playing video games? So my new standards aren’t suffering, and I’m having so much fun playing along to all different types of music. Looks like it’s time for yet another band name in my discography.

The info on Dave Witte’s latest projects, go to myspace.com/davewitte. 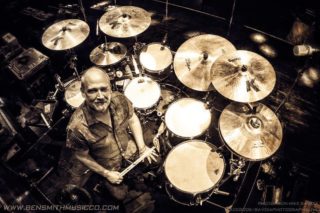 On The Beat with Ben Smith of Roadcase Royale and Heart: Talks New Band and Debut CD