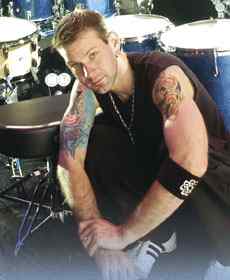 Making grooves “pop” is Chad Szeliga’s purpose. The drummer joined Breaking Benjamin for 2006’s Phobia, and his experimentation with jazz, bebop, and fusion helped him pepper a huge modern rock record with incredibly tasty nuances. “Listen to Vinnie Paul,” says Szeliga. “He swings. There’s a bounce to his groove. Or check out Danny Carey with Tool–he’s not just a rock or metal drummer, he’s a fusion drummer.”

With Breaking Benjamin, Szeliga takes a working man’s approach in the studio and on stage, giving each song the right nuance. “I like to play dynamically,” he says. “Keep it under control in the verse. Then, when the chorus hits, blow it up like a fireworks show. You don’t want to see the grand finale right away; you have to build up to it.”

With Phobia containing four major singles and the group touring nonstop with acts like Nickelback and Three Days Grace, Szeliga feels his drumming is continuing to evolve and grow deeper. In fact, he’s already looking forward to the challenge of coming up with interesting parts for their next record. “I want to keep writing great drum hooks,” he says. “Drumming comes from your soul. The truth is, everyone has a rhythm. It’s just each individual drummer’s flavor that makes the beat their own.”
Steven Douglas Losey