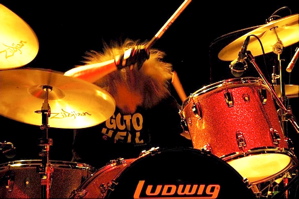 What do Chuck Biscuits (DOA/Danzig), Bill Stevenson (Black Flag, Descendents, ALL), Virus X (Articles Of Faith), and Spit Stix (Fear) have in common? They are some of my favorite drummers of all time. The energy these drummers produced was mind-blowing to me as a young self-taught drummer in Chicago. I would sit in my parents’ basement, put on my records, and play along. I would get the chance to see all these drummers perform except for Spit Stix. This was a real bummer because he does some amazing beats that even today I think, “How did he do that?”

Starting with my first band in 1982, Political Justice? (yes, with a question mark), I wanted to try to emulate these drummers. The vibrant punk rock scene in Chicago gave me the chance to see some of the best drummers in action. I wasn’t necessarily into playing really fast as I was into playing hard. I didn’t really come of age in my skills until I joined God’s Acre in 1986. We were doing stuff that would later become popular with help from the influential Sub Pop label out of Seattle.

In 1988, I switched up punk/grunge for the punk/rock outfit Rights Of The Accused. I had seen them many times and was very familiar with the music. My predecessor, Anthony Illarde, was one of those drummers you wanted to be. He was quick, rock solid–and his stage presence was incredible. I had to up my game to fill the slot. Rights Of The Accused was the first band I did any major touring with. Although I made singles with my two previous bands, ROTA signed to the BMG/Noise International label and toured a lot. On the last day of high school, instead of going to parties I jumped in the tour van and hit the road.

In 1992 ROTA broke up, and few months later Wes Kidd (who was also in Political Justice? and ROTA) and I formed Triple Fast Action. In 1994, we signed a deal with Capitol Records and we were living the dream. TFA’s music, in my opinion, was some of my best work. I never really experimented with dynamics until TFA. It opened new doors I’d never explored, and I was teaching myself to do things I never imagined.

In May of ’98, after two albums–1996’s Broadcaster (Capitol) and 1997’s Cattlemen Don’t (Deep Elm)–TFA played our last show. I packed up and moved to New York, where I started my new life behind the scenes. I was Liz Phair’s tour manager for about eight months, and then I got a call from Cheap Trick. Bun E Carlos was looking for a drum tech. I jumped at the chance. After all, I had always been a fan of Cheap Trick. Dream Police was the first album I used my own money to buy when I was a kid. So it was an amazing opportunity to work for them. I got to watch Bun E warm up and do sound checks, and I got my own front-row seat each night. My last show as drum tech was at their twenty-fifth-anniversary show in Rockford, Illinois. Two months after this show, I was back behind the drums as half of the Chicago duo Local H.

I thought I had intense energy in my previous bands. But I had no idea what I was capable of until joining Local H. Playing with Local H is a full cardio workout every night. I have to fill half the stage. (We set up side by side at the front of the stage.) Playing with Local H brings me back to my roots. It reminds me why I started playing in the first place. I want to be like Chuck, Bill, Virus, and Spit.

Local H will be on tour in May and June in support of the new album, 12 Angry Months (Shout! Factory), available online and in stores this coming May 13. Brian St. Clair can be contacted directly at brian@localh.com or at myspace.com/brianstclair. For more info, go to localh.com or myspace.com/localh.