I didn’t know if I should laugh or cry.

Last October, I played a gig in New York at Greenwich Village’s Mo’ Pitkins. Before leaving Los Angeles, I was told the club had a gorgeous Slingerland house drumset–just bring cymbals. I got to the gig and the stage was empty, no drums in sight, until the bartender pointed down a long hallway: “There’s a door back there, drums are inside.”

It also had a line of four guys outside waiting to relieve themselves. When playing “house drums” I’ve learned to expect the worst and, before seeing these drums or taking this photo, the image had already burned its way into my mind. A loud flush sounded, the door swung wide, and there were my Slingerlands (mind you, the house keyboard and guitar amps were safely locked away in a storage closet).

“Get in line,” one slurred. “You’ll get your cans when I’m outta the can.” 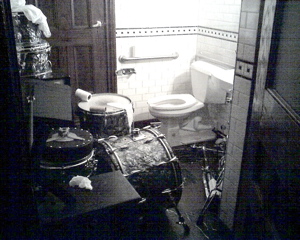 And on that note—I swallowed my pride with a side order of detachment. Sometimes the indignities of our instrument can bring up feelings akin to being asked to sit in the back of the bus or drink from a separate water fountain—but at least we get to use the same bathroom.

To that end, nights like this expiate all feelings of guilt when I listen to tapes of Buddy Rich yelling at his band and find myself thinking, “I know exactly where he’s coming from.”