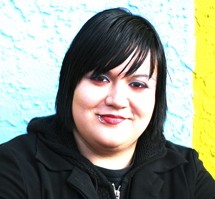 Hey, all, I’m Phanie D, drummer for Girl In A Coma. I’m not your typical drummer, I guess. I’m not taught, and to this day I’m still not too familiar with drummer terms. I learned purely because I love it. I play what I feel is right for the part–and to me, that’s true passion.

I started messing around with drums when I was fourteen. In my first band I played guitar and Jenn Alva played bass. Our old drummer would leave his kit over at Jenn’s house. In the mornings, Jenn and I would jam together with me on drums. I was always able to keep a simple beat. I guess my timing was just naturally there, since my father and grandfather both played drums.

When we started Girl In A Coma, we were having trouble finding a drummer we had chemistry with. It doesn’t matter if you’re the best drummer or how technical you can get— if you don’t have chemistry, you don’t have a band. Jenn thought, Why not me? I was twenty-one at the time, and I played a bit here and there and was decent. So I tried it out. I wasn’t completely confident in myself at our first gig, and basically learned what I do know by watching other drummers in our scene in SA and playing along to some of my favorite records, including lots of Joy Division, Nirvana, and Ramones.

We’ve been together for eight years and touring for about six. I have a lot of practice out on the road playing and watching other great bands and their styles. At the moment we are touring with Morrissey in Europe, and I’m definitely learning a lot from the drum tech. My writing style is now just simply what I feel will work. I’m starting to get into experimenting with other percussion, but I think simplicity truly can be the best approach. There is so much to being a drummer. It doesn’t matter if you’re using fifteen cymbals and toms or just one ride and floor. You’re responsible for moving people, making their heartbeat faster, and making the great guitar riff even stronger. I grew to love what I do because there is so much power in loving what you do and making people feel that passion with an instrument.

Now I have fun playing and I definitely get into it. It’s not technical, but it works for what we do. I try to treat the drums as something more important than just keeping the beat. I don’t try to show off with elaborate fills, because I feel that smallest things can make the biggest difference. As a drummer you don’t want to overpower everyone else, but work together and play off the other instruments, or come up with unique patterns. There is always something to learn as a drummer—but no one can teach you passion. If you at least have that, then it’s never to late to learn.