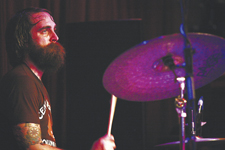 “This is the first record where I don’t really regret anything I played,” says Ted Leo And The Pharmacists drummer Chris Wilson of the band’s most recent album, Living With The Living.

A Philadelphia resident via Arkansas, Wilson drummed in a variety of bands before hooking up with Leo in 2001. Initially, he found Leo’s heart-on-sleeve political pop-punk challenging. “Before that, I’d played in math-rock bands, a kind of Van Morrison band (The Holy Childhood with Leo’s younger brother, Danny), and a shoe-gazey band called Ad Astra Per Aspera. This music, which should have been the closest to what I’d grown up playing, was the hardest. I had to relearn a lot.”

Joining The Pharmacists just weeks before a marathon tour for their second album, Tyranny Of Distance, Wilson had only three rehearsals to learn sixteen songs. Since then, they’ve released three more full-lengths, and a handful of EPs, and put untold miles on their van.

Living With The Living is The Pharmacists album that best showcases Wilson’s talents, thanks in large part to the band’s choice of producer: Fugazi drummer Brendan Canty. One of the album’s highlights is “The Unwanted Things,” a reggae-pop tune reminiscent of The English Beat. When it came to recording the song, Wilson utilized lessons learned on a side gig with the Jai Alai Savant, a Philly-born, Chicago-based post-punk/dub group. “I played with them right before we went into the studio for Shake The Sheets [2004]. I’ve had a whole other approach to that stuff after playing with them.”