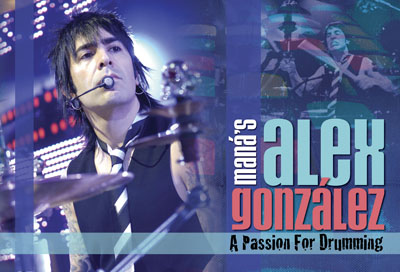 by Robyn Flans
Maná is a true rags-to-riches story. Fueled by an intense passion for music and a belief that music can transcend the boundaries of language, the Mexican rock band has sold more than twenty-two million records and collected eight Grammy Awards. They also just completed a sold-out arena tour of the US–including an unprecedented (for a Latin band) four nights at LA’s Staples Center, in support of their most-recent release, Amar Es Combatir.

For star drummer Alex “El Animal” González, the passion for music stirred very early in life, at the age of four. Sure, many drummers can recall beating on pots and pans around that age, but this kid was actually playing the drums. No question, González was a prodigy. He began taking the instrument seriously and found himself a teacher at the age of five. To say that he was motivated is an understatement. While kids his age were out on the playground, Alex was practicing. And it paid off.

By the time González was fifteen, he was in the first incarnation of Maná. Years of sleeping in a van, eating bread and milk, and playing for small audiences finally paid off when their 1994 album Donde Jugando Los Ninos broke big, becoming Billboard’s Latin Pop Album Of The Year, selling over a million copies in Mexico, and being certified gold in the US. And beyond the popular success of the group, the individual members have been recognized for their abilities on their instruments–particularly González.

So for Alex, this is exactly how he visualized his life would be, back in the day, sitting in his bedroom pretending to play for an arena full of fans. 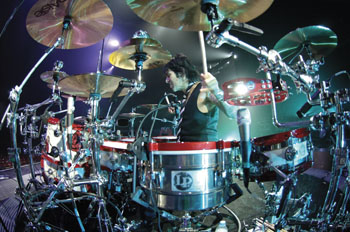 MD: Your drum solo is considered a staple and a highlight of a Maná concert. Talk about your soloing concept.

Alex: As a kid, there were solos I loved. Of course, the first was “Moby Dick” by Zeppelin and then “YYZ” by Rush. I’d listen to these solos over and over again, and they became like a song to me–with different sections and different parts. I thought about that. For part one you start off with something like an intro, from there you improvise, and then you go to part two and then part three.

Also, we have always been heavily involved in our own stage production. I work very closely with the lighting director so that the entire production enhances what I’m playing in my solo.

I’ve always said I’m a drummer who plays for a band, and at the same time, I play to have a good time. I’m not there doing my thing to impress drummers or compete with anybody. Music–and drumming–is not about competition. Passion, being yourself, putting your heart and soul into the music–that’s what’s important to me. People feed off of that.

When I’m playing my solos, no one in the audience leaves to go to the bathroom or to go get a beer. It’s an intimate moment between me and the audience. I’m not there to impress anybody. I’m just there to please them.

It’s sad that there are people in the drumming community who criticize other drummers. I have the same admiration for someone playing in a hotel lobby as I do for a Terry Bozzio or a Vinnie Colaiuta. If I see a drummer playing with passion, I admire them for what they’re doing.

MD: All of that passion that you play with must be tough on you physically. How do you prepare for the physical demands of a Maná tour?

Alex: Two years ago I got into pilates. I also found a personal trainer, because I wanted to get into really good shape for this tour. I started exercising–a lot of cardio, running, bike, and pilates for stretching and toning.

Before I perform I do certain stretching exercises, not only for my hands and feet, but for my body in general, because I am a very physical player. I attack my drums very physically. You have to be careful not to pull a muscle or hurt yourself. I’ll do fifteen or twenty minutes of stretching, and from there I’ll warm up on my Vic Firth practice pad using marching sticks. I’ll play through the basic rudiments–single strokes, double strokes, paradiddles, accent patterns–and build them up to a very fast speed, but without overdoing it. Then I’ll just do simple hits to loosen my arms and joints. 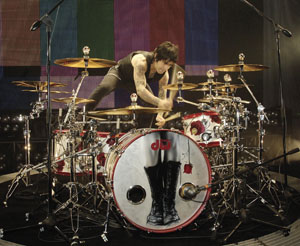 Alex: That’s something pilates has helped me with also. It shows you that the center of the work is from your abdomen. Even for posture, instead of putting all the pressure on your back, you’re putting all that work on your stomach. I’ve learned how to breath better because of that. For singing background and for the two songs I sing lead vocals on, that helps me a lot.

One of the things I can recommend for drummers who like to hit hard is to be as relaxed as possible. I don’t want to say it’s cheating, but I don’t hit rimshots. I always hit dead center with the tip of my stick on the snare and the toms. The technique I have is a slapping technique. I don’t put pressure on the heads, I play off the drum heads–the cymbals, too.

I grew up admiring drummers who would hit the drums hard, but in a very artistic way. I remember seeing Tony Thompson, God bless him, and how he would attack the drums. It was beautiful, like seeing poetry in motion. The same thing with Bonham, Copeland, and Bozzio. It’s very physical, but very musical, and that’s what I try to apply to my style.

As long as you’re relaxed, you won’t hurt yourself. I went to a specialist for bones and muscles before this last tour began. He recommended that after playing I get an ice bag to put on each hand for ten minutes. He said that would bring down the swelling after I played. I did that on this tour and it worked. I never woke up with my joints hurting.

Read the rest of the interview with Alex González in the March 2008 issue of Modern Drummer magazine.