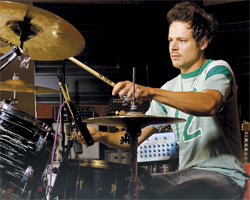 Nathan Wetherington was a working actor in Hollywood when he accidentally became a professional drummer. Having played drums from ages ten to seventeen, Nathan left drumming for acting after he scored a two-year gig with The Blue Man Group. But he had an unexpected chance to sit behind the kit again when he befriended vocalist Sierra Swan, who not only hired him to play a string of shows in New York, but also brought him into the studio to record drum tracks for her 2006 release, Ladyland.

Through Swan, Nathan met in-demand producer Linda Perry, who changed the course of his career literally overnight. Perry was so impressed with the drummer’s intuitive feel and unassuming approach to the drums that she phoned him the next day to record with The Dixie Chicks. That quickly, Nathan became the only drummer Perry was calling to work with such high-profile artists as Christina Aguilera, Courtney Love, Alicia Keyes, and Ben Jelen. It was during the sessions for Jelen’s record, in fact, that Nathan walked away from acting and fully embraced his new life as a drummer.

Linda Perry enthusiastically explains why Wetherington is her “go to” guy. “Nathan instantly grabbed my attention because he wasn’t a drummer, so he was listening to music from a different perspective. He’s tasteful about his fills and has a lot of dynamics–plus he’s very versatile. If you listen to all the songs he’s recorded, you won’t even believe it’s the same drummer. Nathan makes everything sound good because he’s extremely sensitive to how he hits everything–from the snare and kick to the toms, cymbals, and hi-hat. Those qualities make him really special to me.”