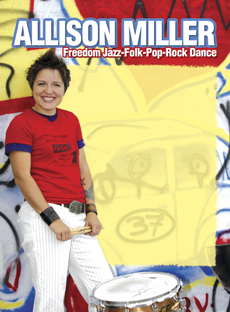 Since moving to New York in 1996, Allison Miller has thrived by refusing to acknowledge musical borders. Alli, as she likes to be called, has allowed her sincere love of pop and rock music to ground her jazz playing–and her passion for jazz to elevate her pop prowess. Whether playing 4/4 with folk-rock singers like Natalie Merchant, Erin McKeown, and Ani DiFranco, supporting jazz maestros Marty Ehrlich and Doctor Lonnie Smith, or taking it out with Shakers N’ Bakers, Agrazing Maze, and her own Honey Ear Trio, Alli betrays a modern vibe and a well-studied appreciation of the masters.

In 2007 we spent a sunny afternoon with Alli at an outdoor café in Brooklyn, where these days she does much of her gigging, rehearsing, and hanging out–that is, when she’s not globetrotting with some of the more interesting acts on today’s jazz and pop scenes.

MD: Scheduling must be a constant balancing act for you.

Allison: Totally. Sometimes I wish I was just in one band, but then I might not be fulfilled musically.

Allison: Finding where to place the beat. I can play with one band and quickly realize, after listening back to recordings, that I need to play more on top of the beat.

MD: Do you mean just the snare drum, or everything that you’re doing?

Allison: Everything I’m doing is leaning forward. I do sometimes make a conscious effort for the snare drum to be a little ahead, but generally it’s everything. But then I could play with another band where I need to play either more on the beat or behind, because everything else is ahead, and by doing that it kind of settles things in.

MD: Who have been your biggest inspirations over the years?

Allison: When I first started playing, I wasn’t into any particular drummer, but I was super into Prince. So obviously Sheila E was an influence. Then I was really into this music from DC called go-go, and I was into early hip-hop and rap. That’s kind of what I listened to in high school.

When I got to college I started checking out a lot of jazz. All through college I was obsessed with Tony and with Jack DeJohnette and a lot of the modern players. Then when I got to New York I realized there was this whole heritage of jazz drumming that I hadn’t really checked out: Art Blakey, Papa Jo, Philly Joe, Kenny Clarke. And in New York there was a way that I saw drummers play that I was like, “Oh, I’m not doing that.”

MD: What was that?

Allison: A certain kind of a forward motion with the ride cymbal. It was about your ride cymbal being the foundation, and everything else working around it. Everybody’s ride cymbal was so strong in New York, so that’s when I really started checking out Philly Joe and Art Blakey, and then I got super into Ed Blackwell. I think Ed Blackwell and Roy Haynes are probably my biggest influences. I love Ed Blackwell.

MD: Earlier today, when you pulled out the snare drum that you used on the Ani sessions, I noticed it had tape all over it. I thought that was awesome, because jazz-snobs are always talking about, I don’t use any muffling…that cliché thing.

Allison: I used to be that way too. It’s funny, I feel like the longer I play music the less of a snob I’m becoming. There was a period in my life, in my mid-twenties, when you could have mentioned the top ten people on the Billboard charts and I would have had no idea what you were talking about. I was such a jazz head, and I only listened to records recorded before 1970. I think sometimes to really dig deep into a musical style you have to do that. But now I’m fascinated when I hear a drummer play a rock beat and it really feels good.

MD: When you’re in an improvisational situation, how far in advance are you thinking?

Allison: I stay right in the moment and let the music guide me. When I start to think in advance, I just get in my own way. It limits the possibilities of where the music can go. The best players are the ones who listen and develop a musical idea with a natural arch, without controlling the situation.

MD: What are some of your thoughts on soloing?

Allison: I usually solo over the form of a song, and the whole time I’m singing the melody in my head. Of course I have licks and things that just come out. I think soloing really reflects people’s personalities. I never have a million ideas coming at me at once. When I do, it’s disaster in my life. [laughs] If an idea comes to me, instead of playing that idea and then breaking away from it, I try to develop it for a while. I like to think like a classical composer. The idea is the motif or melody. I then expound on it using different contrapuntal techniques. Let me build it, turn it upside down, elongate it, squish it together, subtract snippets…. Or, Okay, I just played that in my hands, now let me play that in my feet…now let me play a combination. I usually do this with an ostinato going in one or two limbs.

I always like to say to my students, “Space is the place.” When you start a solo, you don’t have to start with a million notes. Start with a couple measures of rest. Don’t play anything, and I swear that will get everybody’s attention in the bar.