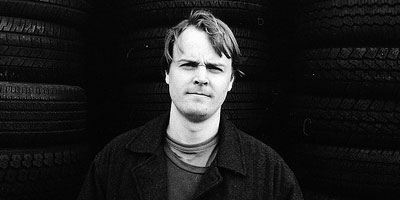 Hello, Modern Drummer readers! I have been asked to write an entry about the new Hans Blix album, What’s The Highest Number You Can Think Of? For those of you who are not familiar with us, Hans Blix’s music is entirely improvised, and has no preconceived material that is written before we play. For this album, we recorded fourteen hours of music in nine different sessions, and later chopped it down to 45 minutes of material (which is what you get with the album). This album, our first, was recorded entirely in my living room (which comfortably rests above a tire shop). It has been an incredible learning experience for all of us. Before this project, we knew very little about recording–especially miking drums!

At the beginning of the recording process, I used the standard drum setup, with a snare drum, two toms, a bass drum, a hi-hat, and two cymbals (Bosphorus Hammer Series). As the project went on, I began to hear sounds that required the use of other percussion instruments, such as cowbells and shakers. I also began to experiment with cymbal stacking and using a splash cymbal on the snare drum or toms. Since the recording, I have expanded my setup even more. I now use a small Casio keyboard run through various distortion pedals. The recording and experimentation process has taught me a lot about what I like and don’t like when it comes to drum sound. In general, for more rocking sections of songs, I like sounds that are very sharp and bright. For ambient sections, I like sounds that are darker and more legato-ish. Certain sounds work well at different times, and create a different effect.

Spontaneously creating a song, in a recording or live situation, can be a daunting (and sometimes TERRIFYING) task. There is no preconceived composition to carry the music. What you are performing at the moment IS the composition. In Hans Blix, we don’t view improvising as only soloing or jamming. We feel that we are composing a song on the spot. One thing that has helped us is to use visual cues, which we grew stronger at during the making of this album. We’ve also begun to specify before we play some general guidelines for a piece. Often we will specify a tempo, key, and general feel or groove. Having a plan is empowering and helps to throw you into the right mindset to create a strong spontaneous composition.

I learned a great deal about improvising from this project as well. Because we recorded so much music, and listened to all of it, we all got a strong sense of the tendencies of our improvising, good and bad. There is no right or wrong in music, and a unique thing about Hans Blix is the wide variety of material that we create. Some of our songs are ambient, some are danceable, and some are rocking. The role of the drums can be to create an ambient sound-scape, to lay down a groove for others to play on top of, or to solo while the other musicians accompany. There are no hard and fast rules. The songs that sound the strongest are the ones where the three of us are on the same page and creating a piece with a sense of togetherness about the concept of how the song should sound.

Perhaps my favorite thing about Hans Blix is the way we work together as a team while improvising. This chemistry (which is a very important component for a band) has grown a great deal through the process of this album (both listening back and talking about why we liked and disliked certain recordings). My advice to someone who wants to create spontaneous composition is to find people you really feel comfortable playing with, and play together A LOT. Talk about the compositions that you create, and discuss which ones are strong and which ones need some work (and also how and why they need work). This can be a really fun process, and one from which we can all learn a great deal about ourselves!