It could be coincidence, but it bears mentioning that since Jon Moen began drumming for The Decemberists in 2005, the band’s stock has risen dramatically. When Moen joined for the tour behind their folk-pop masterpiece Picaresque, they were playing 800–1,000 seat rooms. By year’s end they were selling out 3,000-seaters.

Next came the jump from indie label Kill Rock Stars to Capitol Records for last year’s The Crane Wife. Another busy touring season followed, which has seen the band graduate to festivals like Bonnaroo and dates with local symphonies at storied venues like the Hollywood Bowl.

“I think they had their groundwork pretty well-laid,” Moen says with a laugh when asked about the timing of his membership and The Decemberists’ ascent. “But I have thought about how lucky I’ve been in this particular profession. I think about how long I’ve been doing it and how old I’ve become (thirty-eight). It’s odd that it’s fallen together this well.”

Moen’s self-effacing nature belies the fact that he has been working hard for many years. And his varied gigs–like pacing The Dharma Bums’ sprightly guitar pop in the late ’80s and early ’90s, and helping Stephen Malkmus & The Jicks straddle a hazy line between crisp indie rock and waved-out jams earlier this decade–have informed his timekeeping M.O. with The Decemberists: Play imaginatively, but always serve the song first.

“I’m certainly not a drummer’s drummer,” Moen says. “It’s the ultimate irony to be in Modern Drummer, which I used to read avidly, because I feel so far removed from that world. I just try to play the songs, rather than play my drumkit, for you. Being friendly to the arrangements is key.”

Moen says applying that principal of tasteful simplicity on The Crane Wife was challenging, as the record ambitiously glides from perfect three-minute pop gems, to prog-leaning four-part suites, to the four-on-the-floor pulse of “The Perfect Crime #2,” where Moen grooves like Charlie Watts circa Some Girls.

“That’s quite a compliment, though I have a hard time accepting it,” says Moen of the similarity between his playing and Watts’s. “Wait, Charlie played a Gretsch kit back then, I play a Gretsch kit now (an early-’70s kit Moen found on the Internet). Okay, maybe there is a connection.” 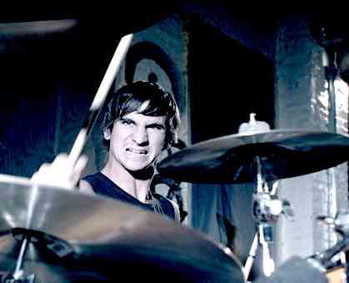 Ray Blanco of The Bangkok Five

On the Beat with the Lion King’s Carter McLean: Talks Video Tutorials and Educational Website