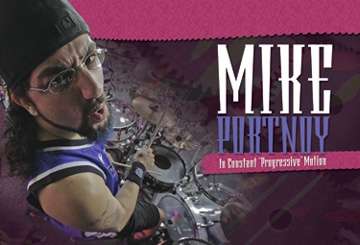 Mike Portnoy may very well be the hardest-working drummer in the business. His recent three-DVD set, In Constant Motion, which focuses on the past few Dream Theater releases, a slew of Mike’s side projects and tribute bands, and features a ton of bonus footage, speaks for itself. The undisputed king of progressive metal never sleeps!

When I asked Portnoy to send me some of his most recent material to study for our interview, he replied with a sinister laugh, “Be careful what you wish for.” I received a package with fourteen DVDs and ten CDs, including Dream Theater’s recent studio release, Systematic Chaos, featuring the drummer’s best performance to date.

Anyone skeptical of the validity of Portnoy’s election into MD’s 2004 Readers Poll Hall Of Fame might take a closer look at his track record in the business, and his contributions to the drumming community in the past twenty years. Mike has won an unprecedented twenty-three MD Readers Poll awards, including this year’s award for best recorded performance for Dream Theater’s Score DVD.

Portnoy doesn’t claim to be the fastest gun in the West–although his technique is still impressive by any measure. He’s not interested in solos and technical drumming achievements. His primary concern is to serve the music. Of course, the music he likes to serve is generally exciting and energetic and prog-based.

Ironically, drumming is a small part of what Portnoy considers to be his most important contributions to his veteran progressive metal group, Dream Theater. But the positive aftershocks of his highly acclaimed drumming skills have made him hugely successful with his legion of loyal fans, and within the drumming industry in general. 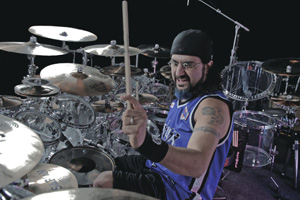 For Mike, it’s the constant push of forward motion that defines the term “progressive rock.” Portnoy creates his art with an ever-expanding appreciation, experimentation, and incorporation of all musical styles into his drumming. This is the true essence of a great prog drummer. So climb aboard Mike Portnoy’s train of thought as the master dissects progressive metal drumming.

MD: Let’s focus on progressive metal. What are the most important “tools” in a prog drummer’s toolbox?

MD: How would you define the term “progressive” in drumming?

Mike: It applies to so many genres within itself. I feel that it started with bands like Genesis, Yes, King Crimson, Pink Floyd, and ELP. Rush helped bring the heavy rock element into it. Through the years, bands like Metallica and Iron Maiden dabbled in it. In more recent years, our band, Dream Theater, brought it more to the mainstream.

If you look at today’s music, the term progressive can apply to bands ranging from Tool, to Radiohead, to Mastodon, to The Mars Volta. You can see that “progressive” has become a very broad term, a term that comes back to a willingness to experiment and keep an open mind to create new things musically.

MD: How has progressive music evolved since its inception?

Mike: After the heyday of prog rock in the ’70s, I think prog became a dirty word in the ’80s and bands like Yes and Genesis had to reinvent themselves in order to survive. They became more pop-oriented. Dream Theater was born out of the ashes of the early progressive rock era and combined that style with the heavy metal styles of Iron Maiden and Metallica, along with the newer prog metal style of Rush.

I think the biggest difference between DT and all the other progressive bands of today is that we’ve always moved with the times while maintaining our sound and style. Now progressive music has gone in a multitude of directions, but many of the heavier bands do sound like Dream Theater, like Symphony X and Pain Of Salvation.

MD: Talk about the great innovators of prog drumming that got you interested in wanting to explore this music.

Mike: My biggest and most obvious progressive drumming influence was Neil Peart. Before I heard Rush I was into The Who, Led Zeppelin, and The Beatles. Neil Peart’s drumming was the first time I’d ever heard a drummer playing a lot of odd time signatures, and his massive kit was immediately intriguing to me. The way he created drum parts that played such a lead role on the early Rush albums captured me. I couldn’t listen to Hemispheres, 2112, Permanent Waves, or Moving Pictures without immediately being drawn to the drumming. I was one of the kids obsessed with Rush and the drumming of Neil Peart in the late ’70s and early ’80s.

From there, I became more interested in the prog rock genre and discovered Yes. I was influenced by both generations of Yes drummers, Bill Bruford, and then Alan White. My favorite Yes albums are the early ones that Bruford played on, Close To The Edge and Fragile. Bruford took the progressive elements of odd meters and lengthy composition and brought more of a jazz drumming style to the music. This gave me another perspective on the possibilities of creating new ideas in progressive drumming. 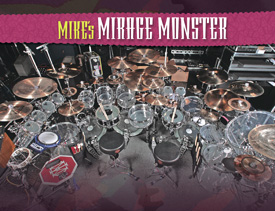 MD: From a technical aspect, what did you have to learn in order to be able to emulate the great progressive drummers?

Mike: The first thing that captured my attention about every one of these bands was the use of odd time signatures. I was drawn to the numbers! The fives, sevens, and nines were so different from typical 4/4. I was most interested in how each of these drummers created their own unique patterns and grooves within the odd meters.

I became obsessed with getting the songbooks for the bands to learn the music. They didn’t have drum transcription books then, so I had to get the piano or guitar books from the Yes or Rush anthology, and I would follow along, counting the time signatures. That’s how I learned to play in odd meters. This has become such a huge part of what I do, in most every project that I’m involved with.

MD: Did you have a firm grasp on the rudiments when you began to learn these odd meters?

Mike: Not at all. I taught myself by playing along to the records. I cut my teeth on Ringo, Keith Moon, John Bonham, and Peter Criss to learn the basics of the drumkit. I never studied the technical aspects of drumming and didn’t have a rudimental background. So when I discovered progressive music, I taught myself to figure out the drum parts by listening.

Mike: Not really. A lot of my favorite progressive drummers today don’t play double bass. Guys like Nick D’Virgilio of Spock’s Beard or Gavin Harrison of Porcupine Tree are not heavy double bass guys. But they’re also not really prog metal drummers as much as they’re prog rock guys. My application of double bass drumming within Dream Theater comes more from my metal side.

Pick up the October issue of Modern Drummer to read the rest of the story.