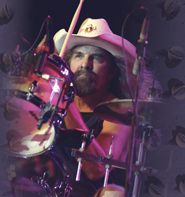 Artimus Pyle has recently released a solo album called Artimus Venomous, the first in what he promises to be a series that will include such titles as Artimus Harmonious and Artimus Dubious. The new album features self-written songs sung by Pyle. According to the ex-Lynyrd Skynyrd drummer, “The lyrics are the result of my carrying around a lot of anger and unnecessary baggage for years, upset and hurt that my friends who I thought loved me had abandoned me.”

Even though his career has seen many ups and downs over the years, Pyle has never stopped drumming. “I still enjoy just taking my drums in and out of their cases and setting them up,” he says. “It’s playtime for me. I’m a pilot, and when you fly an airplane, you have to pre-flight the plane to make sure nothing is going to go wrong. When I play my drums, I feel like I’m flying. You want everything to be where it should be. Setting up is important, and I talk about it in the clinics I do.”

Pyle is on the new Lynyrd Skynyrd tribute album, playing “Double Trouble.” He’s also on a recent ZZ Top tribute album. His own band, APB, is still actively gigging and recording. And he’s been touring behind his Artimus Venomous project. In his spare time, Pyle is in the process of writing a book called Lynyrd Skynyrd, A Blessing Or A Curse.

“I just want everybody to know that when the plane went down,” Pyle clarifies, “I didn’t stop playing drums. I left Skynyrd in ’91 because of their massive, gluttonous consumption of cocaine and alcohol. I was a part of the real Skynyrd. I didn’t want to be a part of something less.”