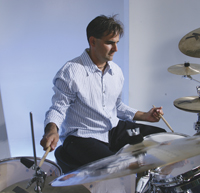 “I began by coming up with different ideas and grooves on the drums, just things I hadn’t played before,” the thirty-nine-year-old Glyde recalls. “Then I began constructing songs based on those ideas and concepts. Some of them were simple little grooves or licks, but others were big song concepts. I then began weaving it all together and making it flow with intros, verses, solos, and choruses.”

When not playing gigs around northern California, Glyde writes and arranges music for drum corps nationwide, collaborating via email with wind players who score brass parts. More recently, he’s been working on Alternate Rhythm 2. “It’ll be the next logical step,” he says, “but not the same thing. I don’t want to create videogame music. I want to get far away from that and develop my own signature style.”