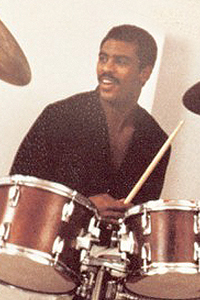 Modern Drummer online, along with some of Yogi Horton’s closest musical friends, is paying tribute this month to the great R&B drummer, who tragically passed away twenty years ago, in June of 1987. At the time of his untimely death, Yogi was the go-to guy for hundreds of sessions, as well as the touring/recording drummer for the late R&B singer Luther Vandross and legendary singer/songwriters Ashford & Simpson. This online tribute is a continuation from piece we published in the August ’07 issue of Modern Drummer magazine.

The History Of R&B/Funk Drumming, featuring Yogi Horton, is one of the very first instructional type videos of its kind. The video, which was produced by Hudson Music founders Paul Siegel and Rob Wallis in association with DCI in 1983, has unfortunately been out of print for sometime now. Paul’s recollection is that Yogi came up with a very strong presentation for the concept right on the spot. “There wasn’t any real discussion beforehand as I recall. He just launched into this spontaneous rap about R&B drumming, particularly Benny Benjamin, the genius drummer at Motown. We were so inexperienced in video production at the time, though, so the audio was recorded very poorly, and the video was rendered almost un-releasable.”

Rob Wallis recalls, “I first met Yogi in 1980/81, at an Ashford & Simpson rehearsal, through a friend of mine, Pete Cannarozzi, who was their keyboard player. I had already heard about Yogi’s playing and incredible groove, but had never seen him play live before—I’d only heard him on records. When I first walked into the rehearsal room, I remember hearing a huge amount of laughter and soon realized at the center of it was Yogi telling some story or joke.

“I also remember the amount of power he used for his backbeat,” Wallis continues. “He raised the stick high and came down with more force than I’d ever see anyone hit a drum with. His snare drum was probably the loudest thing in the band. As they went through their set, it was clear that Yogi drove the band with an amazing confidence. Even on the ballads, he played with complete force and conviction. When we spoke after the rehearsal, I found him to be a very warm and funny guy.

“We talked about him doing a master class,” Rob goes on, “at what was then the original location for Drummers Collective. It was the early days of home video, and Paul Siegel and I started videotaping—very crudely at first—classes at the school. We knew very little about filming, as we were both drummers and running the school. I remember Yogi coming in, rolling tape, and that was pretty much it. We had edited an hour-long video that was one of the first three or four titles our first company, DCI Music Video, ever released. It was a very simple and somewhat crude production and eventually taken off the market due to the production values it had. But it was a glimpse of Yogi and a document of one of the great Funk/R&B drummers of the ’80s.”

Yogi Horton was a member of the Alessi Brothers band for three years in the mid-’80s, touring and recording with Barnaby Bye bandmates and twins Billy & Bobby Alessi. Bobby Alessi recalls one particular evening on tour with Yogi. “He looked like a tough guy on the outside,” Bobby explains, “but inside he was a sensitive, caring person. He was also very honest—one time, in my case, maybe a little too honest. I remember once in Japan, we were all enjoying a little R&R at a popular private club. I was dancing with a beautiful model, having a great time, when Yogi called me over and said, ‘Yo Bobby, if I were you, brother, I wouldn’t dance.’ Needless to say, I suck at dancing.”
Billy Alessi remembers the very first band rehearsal with Yogi. “He came into the studio with all of us there, including the road staff and the our beautiful backup singer Diana Krall. Yogi proceeded to drop his sweat pants to his ankles, walks up to our percussionist, Carlos Rodriguez, and says, ‘Let’s go, sucka, pay up!’ Later we found out that Carlos told Yogi he wasn’t our kind of drummer and was so sure he would never get the gig that they made a bet. He wound up playing with us a for three years.”

Keyboardist Pete Cannarozzi says, “We all still talk about Yogi and smile backstage whenever I do an occasional show with Ashford and Simpson. Yogi and I were roommates for the Ashford and Simpson Solid tour in 1983/84. I could tell you road stories about Yogi, but they’re not suitable for print! As far as his drumming, I recall Yogi being the finest pocket player I ever worked with. His live playing dynamics were always sensitive and explosive, and his studio chops and stamina were never-ending. He will forever be in my Hall of Fame.”

Drummer Chris Parker shared the drum seat with Yogi in 1981 on the Ashford & Simpson–produced recording for their then back-up singer Ullanda McCullough. “Yogi and I used to hang out when he came down to my loft on Grand Street or at Mikell’s when Stuff was playing. Yogi had such a fierce groove and plenty of power behind the notes. He also had a musically wicked sense of humor and took delight in playing things that would trick your ears, like accent displacement, ‘one drop’ reggae fills that incredibly led to the downbeat, or a big crash where you’d least expect it. When he caught you by surprise like that, he’d throw back his head and laugh hard!”