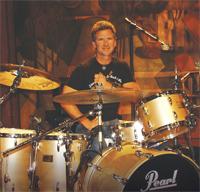 Chuck Tilley is thrilled these days to be occupying the drum seat for popular TV show Nashville Star. “The coolest thing about the gig is that it covers every musical style,” he enthuses, “from hard rock and blues to traditional country and pop ballads. One week we’re doing hard rock with Brett Michaels of Poison, and then the next we’re doing a pop ballad with Kenny Rogers.”

Tilley does a lot of playing on the show. “Not only do we back up the guest artists every week,” he explains, “we play fifteen or twenty other pieces of music within the hour-long show. And we do all the musical bumps going in and out of the commercials. In that way it’s similar to the Letterman or Leno bands.”

The contestants who appear on the show also lend a challenge. “In any given show,” Tilley says, “you might have a contestant do a rockabilly tune, another doing a Les Paul swing number, and another singing more of a Bonnie Raitt contemporary blues thing. But that’s what’s fun about the show. We never know what’s going to get thrown at us, and there’s no tape delay. It’s live.”

While the show is in production, the house band does two half days of rehearsals per week and one full day with the contestants. Then, of course, comes show day. But Tilley finds time to do other things. In 2004 and 2005, he worked with Dolly Parton, doing background vocals on her Those Were The Days album as well as touring with her during a break in Nashville Star’s schedule. Tilly has also toured in the summer months with the Nashville Star winners, and he spends time with his own band, Sixwire. According to Chuck, “I’m lucky that I have a good balance of touring and recording.”