With several projects coming to fruition, Carmine Appice seems poised to reclaim his throne as one of the baddest heavy rock drummers ever.

Power, showmanship, and personality are what make Carmine Appice one of rock’s most notable players. His aggressive, double bass, hard-hitting style was unquestionably unique when he emerged back in the mid-’60s with Vanilla Fudge. And his influence has reached across generations of drummers, including such greats as John Bonham and Tommy Lee. 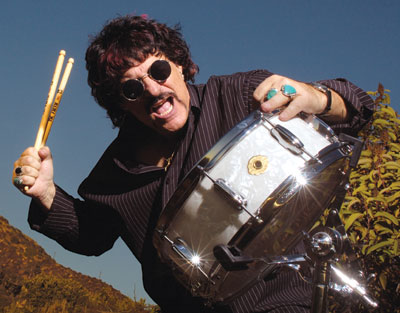 With The Fudge’s trippy treatments of some of pop’s most well-known songs, Appice helped bridge the stylistic gap between psychedelia and heavy metal. And while their singles were too unconventional to hit big, The Fudge’s albums sold well and their fan base was impressive. The band even appeared twice on The Ed Sullivan Show, the day’s barometer of success.

After The Fudge came Cactus, a group in which Appice honed his aggressive style into a more cohesive form. This approach continued to charge his subsequent supergroups, such as Beck, Bogert & Appice (with guitar god Jeff Beck and Carmine’s Fudge cohort, Tim Bogert, on bass), KGB (with Ray Kennedy and Mike Bloomfield), and eventually Blue Murder (featurig John Sykes of Whitesnake and Tony Franklin of The Firm). Among the hundreds of other noteworthy gigs he’s done are guitar-hero Ted Nugent and Ozzy Osbourne.

In terms of fame and fortune, Carmine’s greatest success was during the seven years he spent in Rod Stewart’s band. In the late ’70s, Stewart was a certified superstar, and Carmine had the perfect combination of heavy rock power and pro feel to help propel the singer to the top of the charts. Carmine even contributed to Stewart’s fame by playing the role of songwriter, penning the monster hits “Do Ya Think I’m Sexy”? and “Young Turks.” And a highlight of Stewart concerts at that time was Carmine’s show-stopping drum solo, a true drumming event.

Besides his performing career, Appice has made significant contributions to the field of drum education. He’s credited with writing the first serious book on rock drumming, the now-classic Realistic Rock. With this work Carmine not only supplied the missing link for kids excited about the hard rock music they were hearing on the radio, he helped bring a legitimacy to rock music that previously hadn’t been acknowledged by the general public. That book, coupled with the countless drum clinics Appice conducted, made him rock’s first unofficial ambassador of education.

Today Carmine is busier than ever. In fact, he’s enjoying a bona fide resurgence, as his body of work is currently being celebrated on a number of fronts. Rhino is releasing a four-CD box set to mark the fortieth anniversary of Vanilla Fudge. The same label is putting out a two-CD live Cactus package, which was recorded last year. Also just out is the disc Vanilla Fudge Plays Zeppelin, by the very band Carmine caught our ears with at the beginning of his career.

Appice has further projects available through his powerrock.com Web site, including the playalong CD Songs That Made Led Zeppelin Famous. You’ll also find several drum instructional videos from popular players on the site, as well as Carmine’s successful Guitar Zeus series. As if that weren’t enough, Sabian is celebrating Appice’s knowledge and expertise later this year by coming out with a line of cymbals that he helped design. 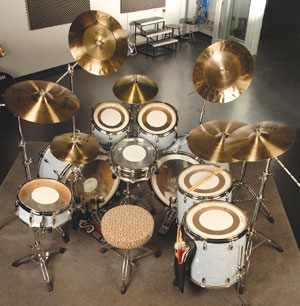 Given all this activity, and the realization that Carmine has lost not one whit of his famous energy depite recently turning sixty, MD recently checked in with Carmine Appice to get at the secret of his longevity.

MD: What do you know about drumming at age sixty that you didn’t know at age twenty?

Carmine: A lot. I know that shallow bass drums have more punch. In the ’60s, I had Ludwig make the 14×26, which was a large drum, but it had punch. Eventually I went with a 15×24, figuring if I decreased the head size, I’d add some depth to it. Well, Ludwig started adding inches to everything, which helped kick off the whole power tom and power bass drum craze. I’ve just gone back to the 14x24s because I realize that the shallower depth has more punch. And that’s true of tom sizes, too. I’m realizing that the old 8×12 and 9×13 sizes have more punch.

MD: What about your playing at age sixty?

Carmine: My playing has definitely improved. I was recently listening to some material recorded from a Cactus collection that Rhino is putting out. I was listening to some of my solos, and, frankly, I’ve come a long way in terms of technique and my speed on double bass drums, especially with the combinations between my hands and feet. I’m definitely a lot faster and cleaner than I was in the early ’70s.
See the April 2007 issue of Modern Drummer for the rest of the interview with Carmine.