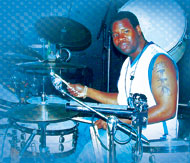 John Blackwell had a problem most drummers wouldn’t mind dealing with. Does he wait around for Prince to decide what his next adventure will be? Or does he work on his solo record, Forever Jia (dedicated to his late daughter). While John was weighing his options, he got a call from superstar and former N’ Sync heartthrob Justin Timberlake to do a promo tour. It began in the summer of ’06 and has turned into a major world tour, which is just about to kick off.

JT’s latest CD, FutureSex/LoveSounds, completed before John signed on, has already reached number-one–as has its first single, “SexyBack.” “The tour is going great,” John enthuses, “and musically it’s not much different from Prince. It’s mainly about playing in front of twenty thousand people and making them dance.”

Justin was familiar with John’s playing, having seen him when he toured with Prince on the Musicology tour. “As big a star as Justin is,” John says, “he’s easy to work for and also one of the coolest people on the planet. And with him being a drummer, like Prince, he understands the pocket.”

John is still on good terms with his former boss and says it’s not impossible that one day they may play together again. “I understand that Prince has many options,” John admits. “I respect him and I’m honored that I lasted seven years with the man. I learned from him. But just like he wants to do something new, I also want to try something new.”

Before JT’s tour, John recorded with yet another superstar, mogul/rapper Diddy for his latest CD, Press Play. “I cut twenty-four tracks, five of which were chosen for the record.”