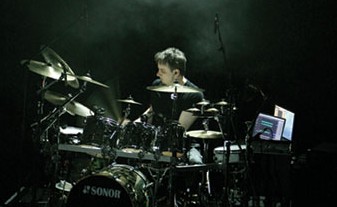 Mind-twisting rhythms meet super-fat grooves? Gavin Harrison is a rare artist who knows how to do both.

If you’ve stumbled across any of British drummer Gavin Harrison’s educational books or videos, you’ll know that he’s deep into some tricky business: rhythmic displacement, rhythmic illusions, and the like. But you have to see him with the band Porcupine Tree, currently creating a stir on tour and on Internet forums, to appreciate that, as difficult as his drumming concepts can get, Gavin’s not in the business of trickery. He’s into elevating the drums as a musical instrument. Judging from his success, he may well be one of Britain’s top drumming exports of the past two decades.

In the repertoire of Porcupine Tree, behind the memorable, often romantic melodies lurk some exceedingly treacherous arrangements. Although there’s plenty of improvisation, this is no jam band. It’s a tightly honed unit that can stop on a dime. When there’s a push, the band pushes as one. When they pump up the volume, they lay waste metal style.

The incredible intricacy behind the power is very much Gavin Harrison’s doing. Once you catch him with PT live or on their brand new concert DVD, Arriving Somewhere, you’ll know that he’s the perfect drummer for the band. His fills are pure wizardry, often taking their inspiration from some turn of phrase and launching into brilliant commentary–for example, rapid flurries from floor to rack toms, clattery flutters on rims, or sometimes just simple glissandos with bare fingers against heads, conguero-style.

And that’s only the half of it. The other half is the enormous groove and sense of swing, a product of Gavin’s refined knowledge of note placement and his close study of groove greats Steve Gadd and Jeff Porcaro. Following in their grand tradition, he makes it all sound simple, no matter how dense and cluttered it gets on stage.

Though Harrison has done similar with Dave Stewart, Lisa Stansfield, Iggy Pop, Level 42, Manfred Mann, Paul Young, and Renaissance, he has really come of age in Porcupine Tree. His mastery is complete, and somewhat bewildering, such as when he’s performing some magic 16th-note displacement. Gavin has clearly shuffled the deck of drum technique, an ever-pressing passion, as you’ll see in our conversation. No question, he’s done some serious woodshedding–as it turns out, in a wooden shed in his dad’s backyard.

Harrison’s modus operandi is pulling out stray notes and using them as hinges–gateways–to new rhythms. In the wrong hands, this could amount to mere mathematics. For Gavin, however, a tricky accent or a bar of eleven beats must arise from some melody, and it must make musical sense, something he makes very clear on his latest instructional DVD, Rhythmic Horizons. Our conversation begins with his growing reputation as a certified rhythmic illusionist.

MD: You’ve been called a “psychologist of rhythm.”
Gavin: That sounds good, but it’s absolutely untrue. Because of my writings, such as Rhythmic Illusions, perhaps people think I was a professor or something.

MD: But your work involves the perception of rhythm, which gets us into psychology.
Gavin: Yes, but I think that the danger is people perceiving you as a smart ass, that you’re one of these guys who does everything mathematically and thinks out all these incredible polyrhythms. They also may think that you play stone-cold, with no heart and little groove.

I really like rhythmic design; that’s the thing that turns me on. The cliché of the drummer as Animal of The Muppets smashing the hell out of the drums is fun. I like to do that, too, sometimes. But once you’ve been doing that for a long time, you start to re-evaluate it.

MD: You mentioned the mathematical aspect. When you composed “Nineteen Days” [Rhythmic Horizons DVD], you stumbled on a pattern that attracted you musically. At first, you didn’t even know the time signature.
Gavin: I do that all the time. I jam on the drums at home and come up with ideas. I’ve shied away from the speed and technique area because I could see it wasn’t leading me anywhere, apart from being impressive at a drum clinic. The sad ending is that there’s always a kid down the street who’s faster than you.

My dad, who was a trumpet player, wasn’t a flash player who could play high notes. He turned me on to Chet Baker, Miles Davis, and Jim Hall. I could see the beauty in minimalist expression and the effect it had. I wanted to make those emotional effects on the drums, and that’s when I began to explore displacement, modulation, and doing things on the drums that would make you gasp for air and wonder, What was that?

When I was young, I practiced in a shed, in which my dad had nailed some mattresses, trying to keep the noise down for the neighbors. I enjoyed exploring rhythms. Bringing it back to “Nineteen Days,” it comes from closing my eyes and letting things come out. I’d stumble across some idea and I’d like the sound of it. To this day, I would never sit down and say, “Okay, I’m going to write something in 27/16.” I’d play patterns that would make me feel certain ways–much like a film director does when he chooses music that’s edgy or relaxed. In other words, I’d generate an emotional trigger rather than some traditional drum thing where you apply the rudiments.

For “Nineteen Days,” I liked the feel of this pattern. I kept playing it until I managed to press record on a tape machine and get it down. Then I worked out the time signature.
My fear of getting lost in a band situation made me start thinking about time signatures and the beauty of them. The first time a lot of drummers come across 7/8, they make it sound very stiff, but there’s no reason you can’t play 7/8 and make it sound as good as 4/4.

MD: I think many of the early prog-rock drummers, like Phil Collins and Bill Bruford, did a pretty good job at it.
Gavin: I didn’t really grow up listening to English music. I listened to American music because my dad was a jazz musician and he thought American jazz was so much better. I moved from straight ahead bebop to funk, played by John Guerin, Steve Gadd, Steve Schaefer, and Harvey Mason. Local guys would play tricky time signatures and it always sounded as if it was hard for them to do, but when you listened to Gadd play in seven, he played it as smooth as he played in four.

Getting back to the design thing, I’ve always loved when somebody comes up with a drum part that makes sense. I’d analyze it and write it down. I began to realize that, say, if I altered the start position of a pattern, I’d have a completely different groove. So I’d write out a part starting in different positions in the bar and come up with five different grooves. Actually, they were the same groove but perceived differently. It was a sort of manipulation.

In the mid-’80s, I started collecting all of these ideas on manipulating perception. A friend of mine came up with the phrase “rhythmic illusion.” It got me thinking about raising new ideas. Eventually, I had enough material for a book and began to organize it in terms of what I could call all these various types of manipulations. That became my first book, Rhythmic Illusions.

For more on Gavin Harrison, visit his Web site, www.drumset.demon.co.uk.

Check out these other articles from Modern Drummer about Gavin Harrison: