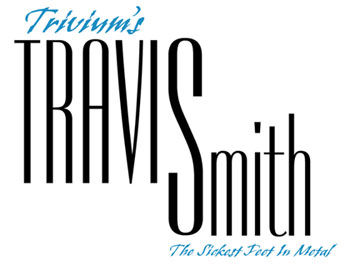 Trivium drummer Travis Smith’s career launched with a slightly rocky start. As a pre-teen growing up in Florida, Smith recalls having to be coaxed out of playtime with neighborhood friends by his father to attend his regular drum lessons. According to the drummer, “Having to go to lessons when you want to be out riding your bike with your friends is tough. But when I’d get to my lesson, I’d totally enjoy it. And I’m glad I stuck with them, because they’ve really paid off.”

“Paid off” could be considered an understatement. A decade after getting his start behind the kit, Smith has become one of the most recognized, rising drum stars in extreme metal. With the release of Trivium’s second album, 2005’s Ascendancy on Roadrunner Records, Smith and his bandmates found themselves fast becoming a major stage act, co-headlining 2006’s Download Festival with Korn and Metallica in the UK, as well as the domestic Sounds Of The Underground tour. In addition, Trivium has achieved several accolades from a variety of publications both at home and abroad. That’s outstanding for a band that, just three years earlier, was slugging it out in underground metal circles. 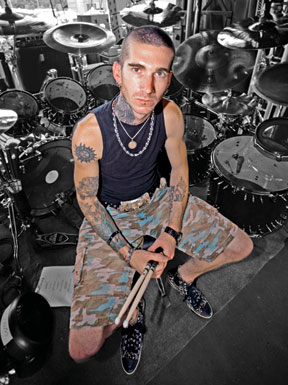 For the twenty-four-year-old Smith, getting to this point has been nothing short of a dream. But listen closely to any Trivium song from the band’s three albums, including its newly released full-length, The Crusade, and you’ll quickly realize why Smith has been such an integral part of Trivium’s success. His strict attention to detail, fluid ability to up the ante at any given moment, and unmatched double kick drive at blistering speeds have given the drummer an advantage that’s earned him well-deserved recognition, most notably from his own fans. And for this thrash metal maestro who was raised on drummers like Dave Grohl and Lars Ulrich, that’s the ultimate compliment and motivation.

“It feels really good to be making an impact,” Smith says. It’s gratifying to know that people are really enjoying what you do. And it’s rewarding when people come up during signings and ask me, ‘On this song, I need to know how to play that part.’ It’s like, Wow, people are noticing, people are paying attention. That’s really wonderful.”

MD: On the subject of your double kick technique, how did you get your start, and how did it progress through the years?
Travis: I got my first double kick pedal when I was fourteen, and I was horrible at it. I was taking lessons at the time, and my teacher, Joey Everline, gave me pointers on different technique styles.
When I first started, I was like full-blown, go for it. I didn’t really have technique. But over time, I started to develop my own technique, which involved playing heel up. And that worked for a while. But eventually, I couldn’t get as fast as I wanted by playing heel-up, for the fact of the matter that you’re moving too much of your leg when you’re playing that way. It wasn’t consistent, and I would tire a lot quicker.

About two years ago, I started working on this other technique where you’re playing almost flat-footed, heel-down, and you’re letting the pedals do the work instead of your whole leg. I started to develop that technique on the pads, and then I translated it to the kit. I’m very happy with the outcome. I’m a lot more relaxed now, I play a lot faster, and I’m able to maintain consistency much more so than playing heel-up. 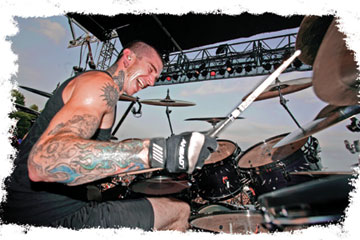 MD: How long did it take you to get that technique together?
Travis: It’s something that took a while, and then it just kind of came one day. I remember we were playing somewhere in England and I came to this part of a song that would sometimes give me trouble, especially if I was having a bad day. And it was one of those shows where I was like, “Man, I don’t think I’m playing well.” When that part came up, I was thinking, “Ah, great, I’m going to blow this.” And then, I guess, from just practicing that heel-down technique for so long, my body naturally took over, and, bam, I just flew through the part. I was like, “Damn, man, it’s really paying off! My body is just starting to naturally take over instead of me having to think about it.”

I don’t like to think about a part when I play. I just want my body to naturally do it. I’ve learned from the past that when I start to think about what I’m going to do, that’s normally when I mess up. It just started happening and I was really happy with the outcome.

Normally before a show, I’ll spend about a half hour to forty-five minutes on pads. And I’ll do about fifteen minutes of stretching before that. So it’s almost an hour-long process before I go up on stage. 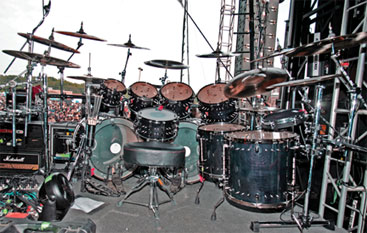 With my hands, I’ll do a bunch of big, open 8ths to stretch out and get warmed up. Then I’ll do a lot of doubles, and then doubles with accents. It settles my mind and gets me relaxed. And then, after that, I’ll go into triplet exercises, which are a lot like the double exercises I do, except it’s all with triplets. After a couple of rotations of that, I’ll start free-styling my hands–throwing in different rudiments, different flams, doubles, and triplets, just to keep my mind free and relaxed. Then I’ll go back and run through the whole routine again, but I add in my feet as well. I also work on odd combinations, like right hand, right foot, left hand, left foot, left foot, right hand, right foot, left hand. Then I’ll work into 16ths with some triplets thrown in the middle, and then 16ths with some 32nd notes thrown in.

After I go through all of that, I try to calm down my feet. I just sit there, maybe do another set of stretching. Then I’ll just play continuous 16ths with my feet to get into the zone.

For the rest of the article, pick-up the January issue of Modern Drummer at a newsstand or bookstore near you.