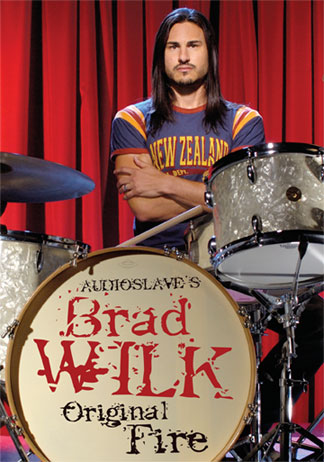 For a guy who can really punish his drums, Brad Wilk has always been hip-shakingly funky. In 2002, he told MD, “I’ve listened to a ton of old organic funk. I would go to sleep with James Brown records on repeat.” Indeed, there’s always lots of groovy nuance in Wilk’s work, whether it’s a bit of behind-the-beat pull that he calls “being on the back end” or a devastating chunk of bass-snare-hats syncopation.

The hip-hop bent of Brad’s former group, Rage Against The Machine, allowed the drummer to revel in that syncopation, but he had to smooth things out a bit for the more straight-ahead hard rock of Audioslave’s first two releases, their self-titled 2002 debut and 2005’s Out Of Exile. Wilk’s beats still breathed deeply with airy ghost notes and perfect back-end placement, but the funk vibe was much more subtle. Now, however, on the new Revelations, Brad explodes in a powerful display of grooviness. And, conversely, a groovy display of power.

Revelations bears all the Audioslave hallmarks–huge, heavy riffs and sonically experimental solos from guitarist Tom Morello, deep-pocket bass lines from Tim Commerford, emotionally edgy vocals from Chris Cornell–along with what for many fans would be an unlikely influence: ’60s and ’70s soul and R&B. For Wilk, though, it’s perfectly natural that old-school groove ideas would seep into the Audioslave sound. “We’re just doing what we know how to do,” he says. “That’s stuff we grew up listening to. There aren’t a lot of musicians that play that style anymore. They’re out there, but it seems like it’s a dying breed. That’s why it’s so important that we keep that history alive.” 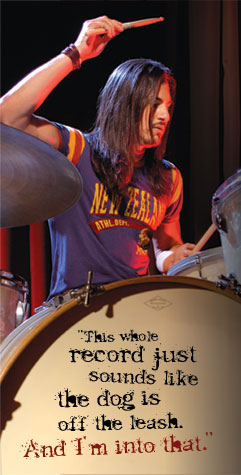 Just take a listen to the ultra-slinky drumming on “One And The Same.” Brad opens his hi-hat on the upbeats–and adds some tasty tambourine on the downbeats–like a vintage funkster. When it’s time to go to the ride cymbal for the guitar break, he plays with confident looseness as he messes around with bell accents and hints of swing. Throughout the album, his parts feel relaxed yet exciting. And he plays some killer intro fills, like the wicked snare-toms lick in the bone-crushing closing track, “Moth.”

The freshness of the performances on Revelations reflects the fact that Audioslave has gelled into an efficient music-filled unit, eager to release discs at a pace that leaves Rage’s somewhat stingy output in the dust. Since MD spoke to Wilk on the eve of Audioslave’s debut, the band has made national and European touring treks and even headed south–way south–to Cuba. The free May 2005 show at the Anti-Imperialist Plaza in Havana, with an audience of over 60,000, marked the first time an American rock band had performed on Cuban soil. That experience, which was captured on the Live In Cuba DVD, offered a great dose of inspiration to a bunch of guys who already take their roles, and their success, seriously.

“Music is such a positive way to convey your feelings, no matter what they are,” Brad says. “We have a really strong work ethic. I feel like I’ve never played a half-assed show, and that goes back to the Rage days. As difficult as Rage was, for all the turmoil that was going on until seconds before we walked onstage, once we got on that stage everyone would give one hundred ten percent. It was purely a passion-filled musical performance. Because that’s all we really have, and that’s why I got into this to begin with. The fact that there’s a bunch of people who’ve come to see you play, I don’t take that for granted at all.”

MD: Last time we spoke, you talked about simplifying for the first Audioslave album, how syncopation that might’ve worked with Rage didn’t feel right. But now it sounds like you’ve loosened up a bit and are playing a little more. 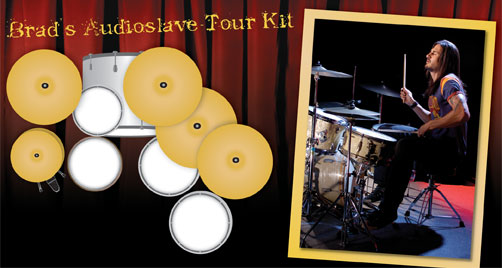 Brad: I agree. Strangely enough, it wasn’t even something we talked about. But the music we were coming up with seemed a lot funkier, and the way Chris started singing over it was different as well. Also, since it was our third record, it’s not like we had to make sure it wasn’t funky or wasn’t like Rage Against The Machine. While this record is funky, it sounds nothing like a Rage record.

MD: You spent a lot of time getting your parts just right for Audioslave. Was the process less thought out for you this time?

Brad: When we first got together to make this record, we spent about a month writing the songs, and I think we had around twenty songs to record. What went by a lot quicker this time was the time in the studio. And the time between writing the stuff and going into the studio was a much shorter period. I didn’t have time to sit around overthinking parts and whatnot, which I could easily be accused of doing.

MD: Your “Original Fire” pattern is like a Motown beat, with the snare on the quarter notes. It even has handclaps.

Brad: I really enjoy that song. It definitely has an old-school vibe, and it doesn’t really sound like anything we’ve ever done, which is kinda neat.

MD: So you didn’t say, “Let’s think mid-’60s here” or anything like that when you were making the album?

Brad: Absolutely not. It’s just what came out.

MD: We’re at a very different place in the history of Audioslave than we were the last time we spoke. At that point, you hadn’t even played a show. Some critics dismissed the group as not being a “real” band, but by now you’ve shown otherwise.

Brad: I feel blessed to be able to be in another band and have it be as successful as it is. It’s nice to have that connection, to be able to go on to something different with Tom and Tim. The four of us never really thought about whether it was a real band or not–that was left up to the press. To us we were just doing the things bands do. We make records, and we go out onstage and play. That’s what bands do. What is “real” anyway?