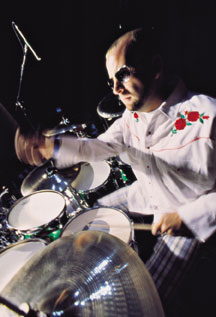 The SoCal band Sugar Ray, with poster-pinup lead singer Mark McGrath, guitarist Rodney Sheppard, bassist Murphy Karges, DJ Craig “Homicide” Bullock, and drummer Stan Frazier, have definitely proved to all the critics who once labeled them “one-hit wonders” that they are here to stay.

For those unfamiliar with the band except for their radio-friendly hits, you may be surprised to learn that Frazier can play a lot more than just those easy-feel good beats over loops. This dude can play. And not only drums. Stan also plays guitar, and he co-writes those songs you hear on the radio just about every fifteen minutes.

MD: Do you play electronic drums?

Stan: I did a few years back. I bought one of the Roland pad kits. I loaned it to Darren from the band Goldfinger, and he hasn’t given it back to me yet. [laughs] I also loaned him some DW pedals, which I haven’t seen either! Darren, I really do want that set back. You know what, though? He’s actually tried to give it back, but I was on tour. I think he knew I was on tour, that’s why he called while I was gone. [laughs]

MD: And at this point the band probably figures, He can afford to buy another one, no problem.

Stan: Yeah, exactly. But that’s a misconception. So, anytime you want to return it, Darren [laughs]

MD: I noticed that in the video for “When It’s Over” you have a Simmons kit.

Stan: Oh yeah. Ross Garfield, the Drum Doctor was the guy we rented those from. I love that stuff. I wish I had that kit. But technology is advancing so much now – The V-Drums are cool. The drummer from The Start, who opens our show, plays a Tama 24″ kick with the Roland V-Drums. It’s a pretty cool setup.

Stan: Oh yeah, that song is a straight-up tribute to The Stones.

Charlie Watts is so great. Some of his drum parts are such great hooks. Like the song “Hang Fire.” Everyone knows all those fills he does and the way he takes the notes off the hi-hat. Some of his stuff is just so awesome. I love his traditional style. It’s fitting for The Rolling Stones. If they had some big flashy drummer it wouldn’t work. You’ve got Mick and Keith, and you’ve got Charlie holding it down.

MD: How was it opening for KISS?

Stan: When we got that call, Rodney and Mark were both freaking out because they are huge KISS fans. I was never a big KISS fan. I was more of a “classic rock” guy. But I appreciated what they did, and I thought what they did was right up our alley. We always kind of believed in the KISS/David Lee Roth kind of philosophy for Sugar Ray. We just want to entertain people. If we can make some people smile and forget about their lives for a minute, that’s what we want. And that’s what KISS did. I did freak out one night when we finished our set and in walks Gene and Paul in full makeup, standing 6’10” or whatever they are. I’d never seen KISS live before. I went out and sat in the audience with my girlfriend, and it was like, Wow. The show, the pyro – We were like, Man, I can’t believe how great that was.

MD: You seem to be having a good time on tour.

Stan: Yeah, I’m really having a lot of fun out there. I think that the people who come to see us live leave with a smile on their face. They leave satisfied. We deliver a lot of the songs they’re going to know, and we give them some stuff from the first record, which they don’t really know. And that’s when people go, “Hey, that guy can play drums!” [laughs] Then I get to come out front and play guitar, and people are like, Man, you have more fun out there than you do behind the kit. I’m just having fun because it’s different. It’s a good dynamic; it’s a good balance. It’s great to be able to be playing drums, but also writing, playing guitar, being in a band that’s current – I’m really fortunate. And as long as this lasts I’m willing to work. Whenever I’m not working on music or working with the band, I feel guilty. I hate relaxing. I need a day off from touring, but one or two days off and I’m going stir crazy.

MD: How did the band get signed to Lava/Atlantic Records?

Stan: When we got signed to Atlantic we only had between three and five songs. We had made a video, and fortunately Doug Morris [from Atlantic] saw the live energy in the video and said, “Sign that band, this is entertaining.” It was a song called “Caboose,” which is on Lemonade & Brownies. We just made a balls-to-the-wall video with a good friend of ours named McG. He’s been like the sixth member of our band since the very first incarnation of it. He’s helped collaborate, and he co-produced Lemonade & Brownies with DJ Lethal. He takes our band pictures. He would drive us around. McG looks out for us. Recently he directed the movie Charlies Angels.

MD: He’s a good person to have in your corner, especially in the MTV generation. Music is just as visual as something you hear.

Stan: Absolutely. Without him pushing us and being there, we wouldn’t be here. He was instrumental in our success. We were separated for a time, and McG kind of brought us back together. There was a time where we decided, OK, this isn’t really happening for us. What are we going to do? Mark had just graduated from college at USC and really wanted to get a job. And rather than pursue the music thing, he was being pressured to join the real world. That was when we kind of split up for a time. And then we all realized what bullshit it was to do what we really didn’t want to do, and immediately we got back together. The next thing you know, we were making a video, and then we got signed.

Stan: Good timing, but it was a lot of luck too. I can’t say we haven’t worked our tails off. We started this band over thirteen years ago, and we worked as hard as we could. We lived all those band stories of living together in a big house, having zero dollars, humping gear to San Diego every Wednesday to play our cover gig. We did it all.

MD: Well, no one in this business gets there without paying dues.

Stan: No, nobody does. And if they do, they’re out of here soon. Our dues definitely got paid – and then some. And to have four records out – that’s more career than I ever thought I’d have. What we’ve done completely exceeded our expectations. It’s given us all opportunities to do other things. I’m very interested in getting into film, for instance, and those are things that Sugar Ray has brought to me. I’m so lucky to be here. I wake up every morning pinching myself, going, “Oh my God, did this really happen?”

MD: As a drummer, you’ve co-written quite a bit.

Stan: I think it’s challenging. I’m always trying to outdo myself or come up with something better or more clever. I look at guys like Elvis Costello as complete inspiration. I want to be as witty and clever and cool as that.

Don Gilmore, is kind of stickler on lyrics, so a lot of the time it would be Don, Mark, and I sitting in the console room, in front of an iMac, waiting for divine inspiration. [laughs] What works best for me, writing-wise, is taking a CD home of the latest versions of the songs, and driving around with it playing. I do most of my writing in my car. Or I put it in the CD player at home and just sit there with a legal pad.

Sometimes I’ll be riding my bike or eating a piece of pizza, and I’ll hear a melody and try to think of a lyric. Like with “Every Morning.” “Every morning there’s a halo hanging from?” That whole thing came into my head in five seconds. I was leaving the studio one day and on my way to the parking lot and the lyrics and the melody came right into my head. I went back in, and our engineer, Steve Gallagher, was putting the mic’s back in the boxes, and I said, “Steve, throw everything back up. I’ve got something for the cowboy song” – “Every Morning” was originally called “The Cowboy Song” then I put it down and everyone heard it the next day and they were like, “Oh my God, that’s going to be huge.” Another time we were locked up in a recording studio in New York, and it was really a downer time in my life. We had released Lemonade & Brownies, and it did well in Europe but it was failing here in the States. So the feeling was like, “Okay, you guys are going to get dropped. You’ll have to go back to your day jobs.” But there was one guy [Jason] at Lava Records who gave us a second chance to make a record. Jason said, “Come to New York,” so we went there for a month and started writing all these songs. We had just come off Lemonade & Brownies tour, and we were writing heavier stuff. Plus, we had done some tours with The Deftones and Korn and all these bands that were really heavy. We’d had some heaviness to us, but we also had more groove tracks. There’s even an R&B song on our first record, “Dance Party USA.” We were looking for an identity, and we just didn’t have it yet. So were locked in this recording studio, writing all this heavy music, and that’s when the shit hit the fan, because Mark, didn’t like the songs we were writing and just decided, “I’m out of here.” So he disappeared into the New York night for weeks.

So anyway, one day we were in the studio, and Murphy started playing this bass line, just A to D, the simplest thing you’d ever heard. I was so depressed because I thought, “Man, this is it. Mark is out of here. He’s given up.” So, I was up in my room one day, and I was like, I just want to jump out the window and fly out of New York and go somewhere else. And I wrote the chorus. [sings] “I just want to fly.”

It’s bizarre when I think about this band in terms of starting from nothing and getting to this. It’s been the most amazing thing, and I can’t think of anything other than this that I’d rather be doing.