Joey Kramer could be the first superstar to become a “modern-technology studio drummer.” With Joey’s new Drum Loops And Samples CD set, anyone can now have the legendary Aerosmith drummer’s incredible feel on their record or demo. 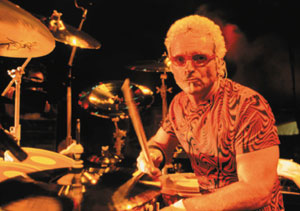 The Rock Icon Gets All Loopy

Joey Kramer could be the first superstar to become a “modern-technology studio drummer.” With Joey’s new Drum Loops And Samples CD set, anyone can now have the legendary Aerosmith drummer’s incredible feel on their record or demo. For drummers, the disc is ideal for analyzing and for practicing to. For songwriters and engineers, the collection of downloadable studio drum tracks is hard to beat in terms of groove and flexibility.

MD Online caught up with Joey hot on the heels of MTV’s Icon tribute show and the release of the double-disc O, Yeah! Ultimate Aerosmith Hits collection, and just before he headed back out on tour with the band.

MD: Recently Zildjian made a presentation to you. What was that about?

Joey: I gave them the kit that I used on the last tour. They’re going to put in the lobby of their factory.

Joey: [laughs] It’s good. You can click on me now at their site.

MD: Let’s talk about your drum loops CD. How did the project come about?

Joey: It was Peppy Castro’s idea. Peppy and I have been friends and songwriting buddies for many years, and years ago he said to me, “You should do a drum loop CD.” And I said, “I’m not sure I’m ready to give my [stuff] away that conveniently in such a nice, neat little package where everybody can just have access to it.” But since then I’ve changed how I feel about it. Now I’m hoping that it will be a useful tool, rather than letting my ego worry about giving stuff away.

MD: Do you think people would be sampling beats off your albums anyway?

Joey: Well, I suppose if they really wanted to they could try sampling off the records. But this is a more useful tool as far as songwriting goes, and less complicated in terms of publishing.

MD: What makes your CD different from others?

Joey: There are three things that separate this from other drum CDs that are out there: Number one is the quality with which it was recorded. The drum sounds, which are completely redone, are the same quality that would be on an Aerosmith record.

Number two, on any other loop CD, they’ll give you one bar to loop. But because of what my playing is about–the emotion and the feel of it–there are two bars, and in some cases four. Whatever it took to establish a feel. There’s a real feel to everything that’s on there. It’s all on a grid so you can cut and paste it, and all the parts can butt up to each other.

The third thing is, we did something that no one else has ever done, which is a multi-track version. There is an 8-track version where you can load it into the Pro Tools and it’ll download onto eight tracks. So you can mix anything any way you want.

As far as the material itself, I just tried to cover the gamut of whatever could be useful–stuff for ballads, stuff for shuffles, stuff for rock ‘n’ roll.

MD: Did you play along to any music?

MD: There are a few of your classic Aerosmith beats on there.

Joey: Yeah, I just hope it becomes as useful to as many people as I think it can be. There are about three hundred figures on there, plus a whole bunch of fills and samples, with all the individual sounds.

MD: For drummers who want to analyze or copy your style, it’s a good practice tool for them. But what do you say to the drummers who complain that maybe it will put them out of work?

Joey: I think there are two schools of thought on that. There’s the drummer who is friends with all the machines and synthesizers and works along with them side by side. And then there’s the drummer who looks at all that stuff like it’s the enemy. To those guys who look at that stuff as the enemy, all I can say is, their days are numbered. In this day and age you’ve got to become friends with all the technology and learn to work with it, and get the best of both worlds.

Anybody who’s savvy with computers, with Pro Tools–or whatever format they are working in–can use it to loop whatever they want. If they want to learn some of my beats, they can just loop them over and over again, and play along.

MD: How were the drums recorded? Take us through the process.

Joey: We were in a room in Rumbo Studios out in Canoga, California, with the drums out in the middle of the room. We just found the sweet spot in the room, and those drums – man, they just sang.

MD: What kit did you use?

Joey: We used a vintage Ludwig jazz kit, which had a 20″ kick drum, an 8×12 tom, and a 14×14 floor tom. We swapped among about dozen snare drums. I used the same toms and kick drum to record just about everything. It was surprising even to me how good they sounded. But Marti Fredrickson, the producer who I recorded this with, and who also did Aerosmith’s last record, is a great drummer himself, so he’s always on the lookout for drums that sound good.

Marti’s one of the best musicians I’ve ever met. He’s a great guy, a regular guy. When he heard about this idea, he was like, “Dude, that would be great. I’d love to do it.” And I like his work so much that I knew I could depend on the finished product coming out the way I would want it to be. On so much of the material that I hear done on Pro Tools, the drumming sounds like a machine. But Marti, being a drummer, is very conscious of preserving the feel. There’s a way to do that, but you’ve got to be careful because it’s really easy to make it too perfect.

MD: You want to retain that swing.

Joey: Yeah, it’s got to have it. My feel is what I’m all about. Marti and I would sit together, and it could be, “I love the way I go into the fill over here, and the way it ends over here is really great, and the middle of it in that last chorus over there is nice,” and he’d say, “No problem,” and he’d put it all together. A lot of times I’d do have him put it together, and then I’d learn it that new way and go back in and record that way. I like to school a song to the point where I go into the studio and play it twice, maybe three times at most. And then Marti can make a composite of the takes. But I would say that he’s generally going to use about 85% of one take. I don’t favor using a great verse part, say, for all three verses, because you wouldn’t play it the third time the same way you would the second time.

MD: How long would you play each beat?

Joey: Until it felt good. Everything was pretty loose. There are twenty-five or thirty Aerosmith songs on there, though that’s the minority of what’s on there. The majority of it is beats I’ve never played or recorded before, just stuff that’s out of my head.

We used bpms as a starting point. I would play like ten or twenty different parts, and then we’d move the tempo up or down, and I’d play them again. Then there are a couple of things on there that are the same, but with different snare drums. Also, a couple of times I’d play the same figure on a tight hi-hat, then on a loose hi-hat, then on a cymbal, and then on a bell. That way you could use the same basic part in different sections. It’s all pretty logical.

MD: How long did the whole thing take?

Joey: I played for about eight to ten hours a day for three days. Well, the whole thing–thinking it up and getting to the point of knowing all that stuff–that took about thirty years. [laughs]

For more on Joey Kramer check out the May 2013 issue of Modern Drummer, available now on iTunes and the Amazon marketplace.