Who the heck is Stephen Chopek? Where did this guy come from? Just ask Charlie Hunter. You know, that famous guy on Blue Note who plays the eight-string guitar. A couple of years ago Chopek was studying with New York jazzman Leon Parker. When it came time for Charlie Hunter to start recording his next CD, Parker was asked to step up to the plate.

Knowing that Hunter is open to new ideas, Parker decided to bring in a couple of guys to help handle the percussive duties. Lucky for Chopek, he was one of those guys. “Leon invited me and another one of his students to play in this percussion ensemble idea he had for Hunter’s record. The ensemble was basically a broken-up drumset.” As a result of that meeting, Chopek landed the gig as the touring drummer in Hunter’s trio.

Chopek’s lifelong study of rock and jazz has paid off. “I grew up listening to early-’80s alternative rock and playing in original bands,” he says, “as well as playing in the high school jazz band. This diversity helped me to focus more on the structure of the song and then orchestrate it on the drums, which is what I do with Charlie. It’s not just about 2 and 4. I need to internalize the groove and communicate my ideas through whatever the song calls for.” 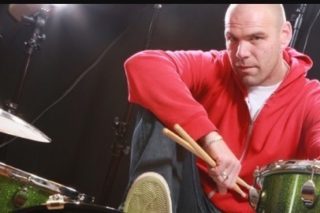 On the Beat with Nathan Curran aka Tugg of Basement Jaxx: Talks Session Work, Artists, and Tours