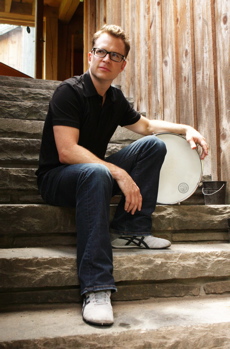 One of the marks of greatness in a musician is that you can recognize him after the first couple of notes. Take, for example, New Orleans legend Johnny Vidacovich, who once showed a young student named Stanton Moore a thing or two about playing looser and more slap-happy. As soon as Vidacovich lays sticks to head, you can tell it’s him. He’s that funky – and he’s got a sound.

Today that’s what everybody’s saying about Stanton Moore. The instant you hear one of Moore’s monstrous grooves, stuttering press rolls, or “jalopy” tom fills, you recognize him. The thirty-one-year-old drummer is that funky and, man, we haven’t even started to talk about his sound.

When Stanton gets behind his kit with Galactic, or with one of his many side projects such as Garage A Trois or Moore & More, there’s no doubt who it is. Call his sound infectious. Call it part jazz-meets-Bonham. Call it nouveau second line. No matter; whether he’s boppin’ behind an 18″ champagne sparkle jazz kick or a battle-worn old 26″, Stanton is serving up new-style funk.

Maybe it’s a little easier to be funky if you’re born in New Orleans and have the likes of Johnny V. steering you right. But it takes something very special to rise to the top, as Stanton has done, and assume a place among the greats’ drummers who’ve risen from the melting pot of Latin, second line, rhythm & blues, jazz, and funk. New Orleans, after all, is where Earl Palmer, one of the slickest drummers ever, started out. It was also home to James Black, a multi-faceted musician people still talk about in hushed tones. And it was fertile ground for the snappy grooves of Meters drummer Zigaboo Modeliste. That’s some lineage.

Moore is clearly next in line. His band Galactic has emerged proudly from the New Orleans scene, and after a slew of albums and relentless touring, has become the group others emulate. Without so much as planning it, Galactic has managed to tap into today’s pulse while proudly hanging onto yesterday’s vibe. The band’s latest release, Ruckus, proves just that.

The focal point of Galactic is Moore. The Crescent City literally oozes out of him. The life, the food, the marching, the sweaty nightlife – it’s all there. At a live show with Galactic, all eyes are on Stanton. As one fan proclaimed on the heels of the band’s recent performance at the Roseland Ballroom in New York, “Stanton is the center of the Galactic universe.” He’s a man in motion, his hands freely traversing his kit, clicking sticks on the rims or shells, beating a jingly thud out of his de-tuned pandeiro, or even standing up and playing the front side of his ride cymbal. And when he kicks the groove into overdrive with his auxiliary bass drum, a 26″ monster, it’s a sub woofer from hell. The crowd goes wild.

No question, Moore’s time has come. He’s everywhere – on tour, on record, and in clinic. Stanton recently won the Eric A. Bergquist award for being one of the top clinicians of the year. He’s just completed writing a book on funk and New Orleans drumming. (An accompanying DVD was just filmed and features Stanton performing with New Orleans music royalty George Porter, Ivan Neville, and The Dirty Dozen horns.) Besides having already released two solo albums, Stanton recently contributed a track to the MD/Magna Carta collaborative CD, Drum Nation. And now he’s receiving calls to produce other bands. It seems everybody wants a piece of Stanton Moore.

MD: Let’s start with Galactic’s latest work, Ruckus. The first thing you hear is that strong descending fill, followed by absolute bottom end. Observation one: Your fills have changed. They still swing, but you’re so much more “on the beat” and nailing them. All I can think of is John Bonham.

Stanton: Cool! With this record, there was definitely a lot of that. In the last couple of years, I’ve been trying to think of ways of adding intensity to a groove without necessarily having to play more notes or play louder. The main way of doing that is “straightening out” the notes a little bit. I’m swinging a little bit less and moving a little more towards straight. Then every now and then I’ll play a fill that comes out swung, because that’s the way I play, and the contrast works.

Stanton: Oh yeah, totally! That’s one of the things I dig about Bonham, Zig, Keith Moon, and Mitch Mitchell. Those guys grew up playing shuffled 8th notes and listening to blues and jazz. When they tried to straighten this stuff out, they couldn’t help but swing it a little bit. I’m always experimenting with that place between straight and swung.

MD: I understand that you used a 26″ bass drum on Ruckus. How does a larger bass drum affect your style?

Stanton: That big bass drum enabled us to make everything super fat. With that drum I was tending to play less as a jazz player and interactively, which is usually the way I play funk. I like to blur the lines between jazz and funk and improvise on the groove – just float through it. The big bass drum made me think a little more from the bottom up; it’s more of a meat and potatoes thing.

MD: It seems that you’re hitting harder and using more matched grip on stage than earlier in your career. When I saw you with Moore & More, I thought you were playing softer and that you were using more traditional grip.

Stanton: I tend to use traditional grip when I play jazz, or more of the New Orleans second-line stuff. But I like to play backbeats with matched grip. With Galactic, we’ve definitely been hitting harder, but then I started backing off and making a conscious effort to play quieter.

At the start of the last tour, I was cracking my maple 5As left and right, so I switched to hickory 5As. After I made an effort to play looser, though, I went back to the maples and could go through an entire gig without breaking a stick. Again, it’s about playing with intensity but not bashing. Bonham was a master of that. Sure, he had bigger sticks and big drums, but he wasn’t really hitting them that hard.

Lately, even with traditional grip, I’ve been experimenting with pinching between the thumb and the middle finger. But the funny thing is that I was looking at a picture of me playing – and there wasn’t a single finger touching the stick! I was playing so loose, just using my thumb and my hand.

MD: You’re involved in a staggering number of projects. Any hints on staying sane when you get so busy?

Stanton: I don’t know. I dig what I’m doing. I have a girlfriend and I miss her when I’m away, but I guess I’ve gotten used to life on the road. Things have been good.