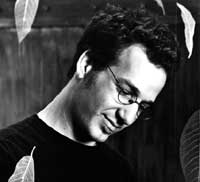 Scott Amendola has never been satisfied to just be an amazing drummer. The thirty-one-year-old innovator has spent his career pushing music in new directions, never more so than with the eponymously named band he leads.

Since moving to San Francisco in 1992, Amendola has been nominated for a Grammy with the band T.J. Kirk, toured the world and played on national television with The Charlie Hunter Quartet, and recorded or performed with dozens of musicians, such as Bill Frisell, Pat Martino, Phil Lesh, and Primus.

But the effort that’s closest to Amendola’s heart is his namesake band. His first effort as a bandleader, Amendola composes and arranges all the music to fit his sax/violin/guitar/bass/drums unit to a tee. “I just try to write what I hear. Hopefully it will sound like me,” he says.

The Scott Amendola Band’s self-titled debut album is available at shows and online at www.scottmendola.