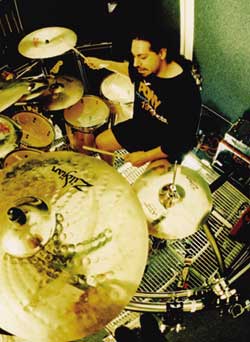 Bad blood among members can destroy even the most fiercely committed band quicker than creative differences, acrimonious label relationships, or poor album sales. When irreconcilable differences between Fear Factory vocalist Burton Bell and guitarist Dino Cazares split the LA-based group in 2002 – after a decade together – it felt like the end of an era for fans of this wildly influential, genre-bending metal band.

In the months after the breakup, bassist Christian Olde Wolbers and drummer Raymond Herrera continued to work together, recording a four-song demo that would fulfill Fear Factory’s contractual obligation to its then label, Roadrunner. Unable to find a suitable vocalist to fill Bell’s shoes, the two approached him about adding vocals to the demo. Finding their creative chemistry still very present, the trio decided to give Fear Factory another shot.

No one was really disappointed when Roadrunner passed on re-signing the band; it meant that Fear Factory was truly free to start fresh. With Wolbers assuming the role of lead guitarist, Bell felt confident that Fear Factory’s musical integrity would be maintained as long as Herrera was on board. “From the beginning of this band,” says Bell, “The essence of Fear Factory was Raymond’s drumming. He’s a machine. We’ve always known that if you just follow Raymond, that’s a Fear Factory riff. He’s the key to how we keep this band’s signature sound.”

On the phone from his home in Los Angeles, Raymond Herrera explains his integral role in the songwriting process. “When you listen to Fear Factory songs, you can tell a drummer wrote a lot of the music,” he says. “The beats and patterns that I do are the rhythms the songs are built around. When we write music, I get together with Christian and we just start banging out all of these different rhythms and ideas; then we take it from there. Most bands write music with the guitar, and the drummer follows that. Our approach is more about coming up with a rhythm on the drums and building around it.”

Determined to rebuild Fear Factory as a better machine the second time around, Bell, Herrera, and Wolbers entered Rumbo Records studio in LA to record Fear Factory’s fifth full-length album, Archetype, a disc that continues their unmistakable sound. Already drawing rave comparisons to the band’s groundbreaking 1995 release, Demanufacture, Archetype is not only worthy of Fear Factory’s legacy, the record also marks an important next step in its evolution. With the new machine ready to shift into high gear, Fear Factory found a home at Minnesota-based Liquid 8 Records. And now Byron Stroud of Strapping Young Lad has signed on as Fear Factory’s touring bassist. Things are, as they say, falling into place.

“We’re really happy with the way everything is going,” Herrera says, “especially since we’ve regained control over the direction we want to take the band. Much of that was taken away from us over time while we were with our former label. Now we’re back in charge of everything, from business dealings to what we want to do with the music’the entire package. Fear Factory is so much healthier now. It’s an amazing time for the band.”

MD: Not only is your double bass work incredibly fast, it’s extremely precise. Can you share some playing tips for developing both speed and accuracy?

Raymond: One thing that really helped me generate better speed was working on broken-up kick drum patterns rather than straight double bass. The problem with straight double bass is that it gets boring after a while. By doing patterns, I started to feel muscles in my legs that I’d never felt before. When you practice that way and then go back to ‘regular’ double bass, it’s so easy to do that you automatically become faster.

I noticed that starting out, when I was trying to get a certain speed with regular double bass, I just couldn’t get there. When I could get there, I couldn’t do it for very long because I’d get tired. By practicing patterns, it brought out something else in the way I play and it built different leg muscles. It’s like a different mentality, and it’s a lot harder to do.

As far as my precision, that’s just something I’ve worked on. Fear Factory music is very precise, so the only option for me was to become precise. There are lots of little parts in Fear Factory songs, where I’m doing all of this really sick stuff. Then, all of a sudden, I’ve got to mute a cymbal with my hand. That’s one of my trademarks, too; when a song stops, I literally stop everything. I clamp down on my cymbals and everything stops.
Accuracy comes from me playing each individual part over and over. For example, there’s a song on Archetype called “Corporate Cloning.” In one part, we go from the bridge back into the verse. When I do that, my hi-hat is open and I have to close it – but I just finished playing a double bass part. So I have to quickly take my left foot off the left kick and bring it down on the hi-hat. I had to practice that part about forty times until I got it perfect.

The reason I’m very tight and precise on all that stuff is I work on those parts so they stand out. As a result, when I go in to record, the engineers don’t have to piece together a performance or mess with it; I can just play it. This also allows me to be able to play everything live. That’s how I became this type of drummer, by consistently practicing those little sections to make them tighter.