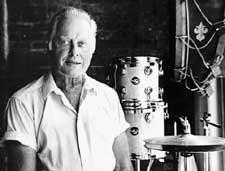 It’s a steamy tropical night in South Florida. I’m sitting out on Jim Chapin’s lanai, watching the eighty-one-year-old drummer rip off amazing licks on his ever-present practice pad while the tree frogs and locusts in the backyard provide a symphonic backdrop. “This is not a drumstick,” Chapin says. “It’s a beautiful golden stallion. When I put my hand on it, I’m a jockey. If I ride him like this [he demonstrates a stiff-armed stroke], I’ve slowed him down to my tempo, my speed. I might as well get off the horse and run along beside him. But a good jockey gets up in the stirrups and gets his weight off the horse. The bell rings, you hit him in the rump one time, and off you go. He’s carrying you.”

Chapin then proceeds to play a set of RLL triplets, executed so rapidly that they almost sound like a press roll. “See, this way, I’m riding the stick; it’s carrying me.” What Chapin is demonstrating is the Moeller technique. Percussionist/educator Sanford Moeller, when in this twenties, observed veteran Civil War snare drummers gathering together to play and was impressed with the way they used the physics of the sticks – a swinging-and-bouncing technique far removed from the stiff precision of many classically trained players. “The way I play has nothing to do with me,” says Chapin. “I am one generation removed from the greatest bunch of bashers that ever played’the little kids in the Civil War. They had to get a bounce. Those old drums had terrible heads, and if the weather was slightly damp, it was all over.”

Chapin has more of a reputation as an educator than as a drumset player, and he knows it. Although he played drums in both the swing and bebop eras and worked with many famous musicians, his legacy will forever be linked to his books and his teaching. One of his longest steady gigs was with what he calls a “peanut” band in Las Vegas. “I wish I had pursued more of a career playing with great musicians. But I was having so much fun, I didn’t care.”