As the saying goes, it’s not what you’ve got, but what you do with it that counts. Australian drummer Grant Collins is proof. Many drummers have a big kit like his. But not many players can audiences amazed with their drum compositions for two hours straight. And Collins performs at clinics and solo concerts without the benefit of backing tracks.

“It all started when I saw a video of Alex Acuna playing timbales and noticed him playing left-foot clave on a woodblock,” Collins recalls. “Then he played kit, soloing over a clave pattern that he played on the hi-hats. I thought, That’s what I want to do.”

Further inspiration struck from a less conventional source. “I saw Australian pianist Michael Keiran Harvey play an ostinato with his left hand while soloing with his right,” Collins says. “I knew I had to try that on the drums.”

Experiments with the hands ended up at his feet. Soon the drummer was playing complex independent rhythms with all four limbs, switching between pedals while soloing over them with his hands.

A conversation at the 1998 Ultimate Drummers Day in Melbourne inspired Grant to take his playing to yet another level. “Dom Famularo saw what I did and really dug it,” Grant says proudly. “He said, “Man, you’ve got so many great ideas. What you should do is think in terms of verses and choruses, and write a song about something.? So I took that idea and began composing all these drum songs.”

Now Grant floors audiences with his intense and complex compositions. To perform these compositions, he employs twenty-five Pearl drums, twenty-eight Zildjian cymbals, and fourteen pedals connected to five bass drums, woodblocks, a cowbell, tambourines, a snare drum, bells, and an oriental crash. And Collins says this setup is likely to get bigger. “I’m writing ideas at the moment for which I’ve had to order two cable hats, another foot snare, and hand percussion.”

Collins’ two CDs, Primal Instinct (1999) and Dogboy (2001), contain no overdubs. What sounds like three or four players is only him. But it’s not until you see Grant play live that you really comprehend what he does. For those who can’t wait for the drummer to come to their town, though, live footage can be seen at the drummer’s Web site, www.grantcollins.com. 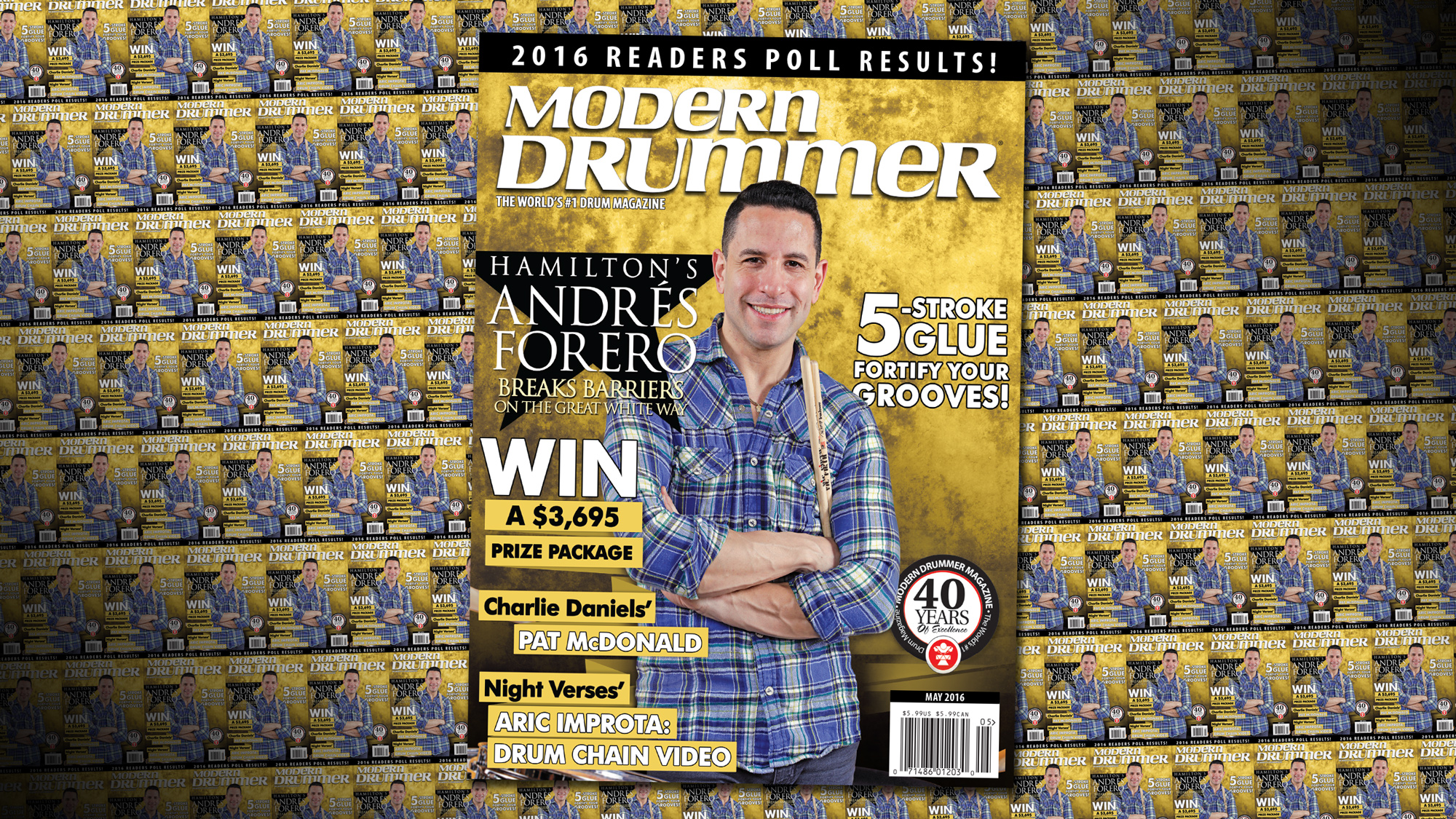 May 2016 Issue of Modern Drummer featuring Andrés Forero of Hamilton

On the Beat With Andrew “Stix??? Cotterell of Feed Her to the Sharks: Rockstar Mayhem Festival Spotlight