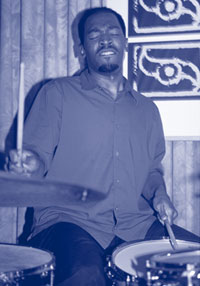 When twenty-five-year-old Eric Harland was a teenager, he weighed an astonishing 380 pounds, making him a target of cruel children, mean-spirited teachers, and sometimes, his own family.

“I would walk into a clothing store and the employees would just laugh,” recalls the Texas native. “Man,” they would say, “we don’t even carry your size in here, bro.” It was automatic, before I could even get in the door. On top of that, kids at school were always calling me fat. It seemed that everyone was against me.”

While Eric dealt with taunts at school, at home life was also a little challenging. His religious mother, believing she had seen a heavenly vision when he was born, was convinced that Eric was the messiah-in-waiting. She took him to voodoo priests and witch doctors to confirm her expectations. But blessed with remarkable common sense, sensitivity, and fortitude, Eric found solace in music and struggled to forge his own identity.

Harland somehow found the strength of character to not only carry on, but through faith, determination, and talent, he far exceeded anyone’s expectations. Currently one of the most in-demand and praised jazz drummers on the East Coast (just ask McCoy Tyner), Eric has recorded over thirty albums and has toured with everyone from vocal great Betty Carter to bassist John Patitucci and saxophonists Joe Henderson and Greg Osby.

“In school, I used music as a way of escape,” Harland explains. “I would lock myself up for hours playing with John Coltrane’s A Love Supreme. I would play along with Jeff “Tain” Watts and Jack DeJohnette; I internalized their drumming. I was also into Dave Weckl and Steve Gadd, cats who approached the drums in a musical sense.”

After collapsing from exhaustion and self-starvation while studying at the Manhattan School of Music in 1996, Harland returned to his home in Texas to get his physical and spiritual house in order. He later returned to New York to tour with Greg Osby. Soon Harland found himself heavily touted by Terence Blanchard, Joe Henderson, and Betty Carter, who he worked with until her death in 1998.

“Betty had this thing for fast tunes,” Harland recalls. “She would count them off real fast, and we’d have to hold it for long periods of time. She enjoyed watching us sweat.”

Like other drummers who’ve learned the ropes with Carter, Harland greatly values his experience with the master. “She encouraged me to be myself no matter what the musical situation. That surprised me, because everyone said she would want me to play like Kenny Washington. But she never demanded that of me. I stayed in her basement for a while, so we talked all the time. She watched me grow. I still feel her presence around me.”

A young man who ran with gangs and preached the gospel – who found his future from a chance meeting with jazz trumpeter and historian Wynton Marsalis – and who successfully fuses the styles of Steve Gadd and Jack DeJohnette, Eric Harland is a unique presence. His work on records by such artists as Terence Blanchard, Mark Shim, and Ravi Coltrane is a study in orchestral drumming. Where many drummers approach conventional jazz rhythms using the ride cymbal as the lead voice, Harland uses the entire set and its variety of sounds to underpin, elaborate, and explore the rhythm.

As likely to play a funky Bernard Purdie pattern as a floating Jack DeJohnette pulse, Harland is musical to a fault, but extremely creative–and even courageous. But that’s not surprising for a man who has not only weathered the storms of life, but prospered, finding himself in the process.

“I think we’re all going through a process in life of gaining a sense of identity and having to defend it at the same time,” Harland says. “You have what flows with it and also what contradicts it. That’s where you get your strength, from the perseverance of being yourself and the balance of understanding your place in this world.”

MD: What constantly strikes me about your drumming is your sense of orchestration. You always seem to be using the full set. You’re not only keeping time and grooving, but creating a part within the music.

Eric: That comes from playing with Betty Carter. She really taught me how to use the drums as a means of orchestrating within the band. She always told old stories about the guys back in the day, and how they were able to shape the music from the drums.

Terence Blanchard told me about his experiences with Art Blakey. He was definitely about orchestrating the music. He embraced a lot of colors. I always approach the band like a painting, helping to bring out the best of each cat in the band.

MD: How did you develop that approach?

Eric: When I began learning to play jazz when I was fourteen, I approached the drums in a more free or wild setting. I would play all over the set, trying to hit everything in sight as I was listening to A Love Supreme. Elvin sounded so good, so I tried to emulate everything he was doing. But instead of learning it note-for-note, I tried to incorporate the whole drumset.

That experience made the drums feel more natural, as opposed to just trying to sound like Philly Joe Jones, where you might not embrace the whole drumset. You might just focus on ride and snare, and not understand the concept of swinging the whole set. Swinging the entire set makes it more powerful with less effort. You play everything evenly, where the whole drumset is moving. All of the elements of the set become like a family.

MD: How do you avoid overplaying with a full-set concept?

Eric: Sensitivity is the key. You have to listen to everyone: how they’re playing, the tone of their sound, and the direction they’re taking. You have to understand their concept.

MD: What’s been the most challenging music you’ve played?

Eric: Terence Blanchard’s music is the most difficult to play. It doesn’t have any kind of given direction. You’re forced to find a direction with the band. Everyone has to come together and focus on the music, which makes it that much better. When you have those good nights and everyone is in sync, the band becomes like a couple. You really have to depend on each other.

Eric: Not at all. It’s all about creativity. There’s so much room in the music that you have to be able to create.

MD: Is he the most challenging artist you’ve worked with?

Eric: Yes, though his music doesn’t sound challenging. It’s not like he does odd meters or something. But when you have open music, it’s like Miles back in his day. His band would play the head, and after that it would be free and loose. It’s a similar concept with Terence.

MD: Do you duplicate the parts you’ve created in the studio for live performances?

Eric:You have to keep it different every night. My role as a drummer is not just to be the timekeeper, but to be a shaper of the music.

MD: You’ve worked with many leaders, from Joe Henderson to John Patitucci. Why do you think they hire you?

Eric: I love to learn, and I love to adjust. Cats like it when you’re learning and really interested in their music, not bombarding them with your own definition of what music is. Everyone has a path, and you have to respect it. It doesn’t hurt to listen and to almost start all over again, yet retain your own view. You have to allow it to grow with the leader.